And Then the Sky Exploded - David A. Poulsen 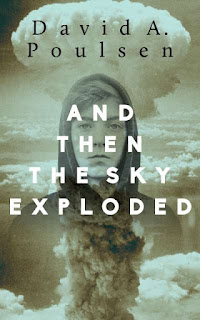 While attending the funeral of his great-grandfather, ninth-grader Christian Larkin learns that the man he loved and respected was a member of the Manhattan Project, the team that designed and created the atomic bombs dropped on Japan during the Second World War.

On a school trip to Japan, Chris meets eighty-one-year-old Yuko, who was eleven when the first bomb exploded over Hiroshima, horribly injuring her. Christian is determined to do something to make up for what his great-grandfather did. But after all this time, what can one teenager really do? His friends tell him it's a stupid idea, that there's nothing he can do. And maybe they're right. Or maybe, just maybe...they're wrong.

Review:
The first thing that caught my eye about this one was that the author is Canadian (yay Canada!). The second thing was that this book is similar to The Blue Helmet where the author uses a modern day teenage boy's experiences to explore a difficult aspect of history.

Christian is fourteen and your typical teenage boy. His great-grandfather, whom he calls GG Will, just passed away, and Christian is incredibly intrigued when he witnesses a group of protestors outside the funeral home. Not getting any answers from his parents, he is tipped off by a school bully and discovers through his own research that his grandfather was a scientist for the Manhattan Project. It's difficult for Christian to reconcile the idea that his beloved GG Will helped engineer a weapon that was responsible for the deaths of hundreds of thousands of people. When he has an opportunity to travel to Japan, he feels a deep need to make amends for the actions of his great-grandfather, and when he meets elderly Yuko in Hiroshima, he actually gets the chance to do so.

As a teacher, this book is the perfect novel to teach in applied classes: it's short, the language isn't overly difficult or clunky, it's relatable, and manages to tackle a difficult subject in a heartfelt, poignant way. The author did his homework: the petition Carson mentions actually does exist (students can google it), the details about Japan are spot-on, and he manages to capture the Japanese spirit in regards to the sentiment of war. There are a few drawbacks though. The first half of the novel moves fairly slowly but it picks up substantially once Christian is actually in Japan. The incident with the protestors is not really believable in my opinion (most people can't even name the scientists of the Manhattan Project let alone care enough to protest at their funeral), and the airport in question that Christian and Zaina are trying to navigate unsuccessfully due to not knowing Japanese actually has English on all signage and is quite easy to navigate even if you don't know a word of Japanese.

Recommendation:
A wonderful novel study choice for applied classrooms due to its ability to tackle difficult subject matter in an approachable way.

Thoughts on the cover:
Strangely appealing but it works here.
Posted by Andrea at 8:28 PM