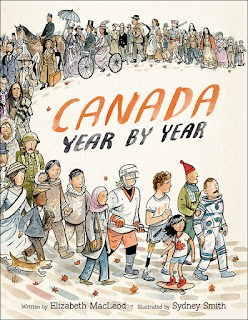 1881 - Construction begins on a railway that will link the country from coast to coast.

1918 - Most women are granted the vote in the country's federal elections.

1932 - Superman is born - not on Krypton, but in the mind of Toronto-born Joe Shuster.

1959 - Jacques Plante of the Montreal Canadiens popularizes the goalie mask in pro hockey.

A unique look at Canadian history, Canada Year by Year captures these milestones and many more in ten chapters filled with sidebars, biographies, quotes, trivia and engaging illustrations. It's the story of the people, places and events that have shaped the country - one year at a time.

Review:
I'm always looking to expand my collection of non-fiction books for kids, especially on Canadian history since most kids find it boring as heck (not that I blame them, our history can be pretty dull at times). This book lists every year, starting from Confederation in 1867, and gives one major event that defines that year. The book is sorted into chapters centred on each 10-20 year period. There are tons of illustrations and tidbits of information in the sidebars, and information on difficult issues such as residential schools and Japanese-Canadian Internment is explained clearly and in an age-appropriate way.

Recommendation:
A must-have for classrooms or home libraries, it makes a great little reference book and educates our kids on milestone events in Canadian history.

Thoughts on the cover:
I love the illustration style, and the illustrator makes sure to depict diverse individuals throughout the book.
Posted by Andrea at 7:16 PM