The Zoo at the Edge of the World - Eric Kahn Gale 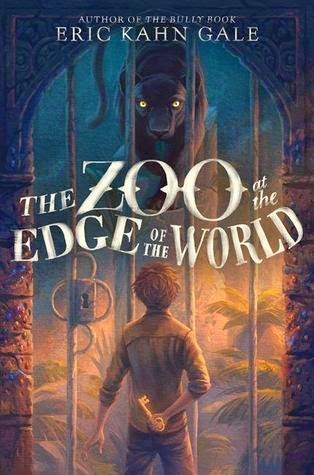 Marlin is not slow, or mute; what he is is a stutterer, and that makes it impossible for him to convince people otherwise. What he is also is a Rackham: the younger son of the world-famous explorer Ronan Rackham, renowned for his daring exploits in the jungles of South America, taming wild beasts and filling in the blank spaces on the map. Ronan is the owner and proprietor of the Zoo at the Edge of the World, a resort where the well-to-do from all over the globe can come to experience the last bit of the wild left at the end of the nineteenth century. For Ronan, each day is a new opportunity to cast a light into the dark recesses of the world; for Marlin, each day is a struggle: to speak, to communicate, to live up to the lofty expectations that his family name carries. This isn't easy when the only ones who understand him are his father and his pet monkey.

In order to impress a powerful duke who comes to visit the zoo, Marlin's father ventures into the jungle and brings back a mysterious black jaguar, the only one in captivity. Everyone is terrified of it, including Marlin - until one night, when the jaguar confers upon him a powerful gift. Soon, Marlin finds himself with a difficult choice to make and, finally, something to say. If only he can figure out how to say it.

Review:
Marlin is twelve years old and lives in South America with his father and older brother. The family operates the Zoo at the Edge of the World, an exotic resort for the wealthy and elite to vacation to. Everyone but Ronan thinks Marlin is a dim-witted idiot, but he has a wonderful affinity with animals and can actually speak to them without a stutter. When his father captures a jaguar as the main attraction for the zoo, Marlin soon discovers that he now has the ability to communicate directly with animals and can understand them. He soon solves all the little problems the zoo has been having by talking to the animals, but also realizes a family visiting the zoo could threaten his family's livelihood as well as that of the animals and needs to take action to save his home.

The book has a wonderful evocative setting. You don't often see books set in the wild jungles of South America during a vaguely reminiscent Victorian era time period, so this was refreshing to read.  The themes of colonialism and control over things that shouldn't be within our control are quite powerful, with Marlin making the choice about what kind of person he wants to be rather than what others expect him to be.

Recommendation:
A great little book that was a surprisingly great read.

Thoughts on the cover:
I like how Marlin and the jaguar are featured, it's a powerful image.
Posted by Andrea at 9:53 PM