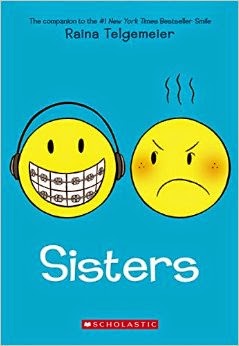 Raina can't wait to be a big sister. But once Amara is born, things aren't quite how she expected them to be. Amara is cute, but she's also a cranky, grouchy baby, and mostly prefers to play by herself. Their relationship doesn't improve much over the years. But when a baby brother enters the picture and later, when something doesn't seem right between their parents, they realize they must figure out how to get along. They are sisters, after all.

Raina Telgemeier uses her signature humour and charm to tell the story of her relationship with her little sister, which unfolds during the course of a road trip from their home in San Francisco to a family reunion in Colorado.

Review:
I read the companion book, Smile, years ago when it first came out. It was pretty revolutionary at the time, a North American comic for kids by a female artist with a female protagonist in completely realistic situations. Most comics up until recently were mostly male-dominated with superheroes in fantasy situations, which I'm not knocking, I love my Batman stuff as much as the next fangirl, but it's not for everyone. Most girls like me in years past turned to Japanese manga for more sincere female protagonists, but I've noticed more domestic comics are coming out that appeal greatly to female readers, of which this particular artist has greatly contributed to.

Whereas Smile looked at author Raina's experience with braces and other dental horrors, Sisters examines her rocky relationship with her younger sister, Amara. Sisters takes place when Raina is fourteen and Amara is nine, while they are stuck in a car for a week each way with their mother and younger brother Will on the way from California to Colorado. Through a series of flashbacks readers see Raina at age four or five begging for a little sister to play with, and her disappointment when Amara is born and her expectations aren't met. Through more flashbacks we see the birth of their younger brother, the crowded conditions they live in, and how Raina escapes through music and art.

I liked how it showcased how different siblings can be, and how not every set of sisters are automatically best buddies for life. Raina is self-conscious whereas Amara is confident, Amara is prickly whereas Raina is more accommodating, and though both girls are quite talented in art, Amara tends to steal Raina's thunder. I also liked the scenes at the family reunion where Raina doesn't fit in with the adults quite yet, is not accepted into the circle of her older cousins, is too old for the younger cousins her brother's age, so she and Amara don't fit in anywhere. As an only child with mostly younger cousins on one side and no cousins on the other side, I can completely sympathize with that feeling, especially when I was a teenager.

Recommendation:
A really humorous look at the tumultuous relationship that can exist between siblings. The art style is appealing, and the content is great for younger readers but can appeal to teenagers as well. Plus, the whole scene with the snake in the car was hilarious.

Thoughts on the cover:
I liked the continuation from the Smile cover, with Raina's smiley face with braces contrasted against Amara's prickly, angry face.
Posted by Andrea at 9:10 PM