We Were Liars - E. Lockhart 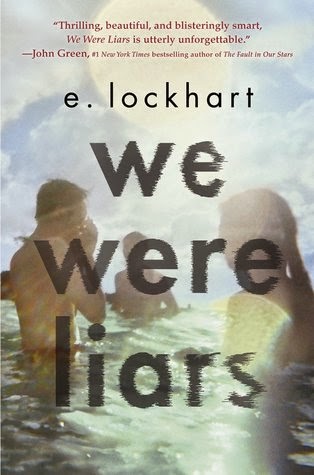 A beautiful and distinguished family.

A group of four friends - the Liars - whose friendship turns destructive.

A revolution. An accident. A secret.

We Were Liars is a modern, sophisticated suspense novel from National Book Award finalist and Printz Award honoree E. Lockhart.

And if anyone asks you how it ends, just LIE.

Review:
I've read books from this author before and quite enjoyed them, so when I saw this new title pop up, I knew it would be good. But whoo boy, I didn't realize how good.

Cadence is the eldest grandchild of the wealthy Sinclair family. There's her grandfather Harris, her grandmother Tipper (who later dies), her mother Penny, her aunts Carrie and Bess, and all the cousins: the Liars, and the littles. Mirren, Johnny, and Gat, who are closest in age to Cadence, are known as the Liars; probably because it's easier to just lie to their mothers and grandfather and appease them rather than provoke an outburst of dysfunctional family goodness. All the branches of the family spend the summer together at Beechwood, their private island.

During the summer before the Liars turn sixteen (what Cady calls Summer Fifteen), something happens to Cadence. She endures a head injury and memory loss, presumably while swimming. She takes time to recuperate, returning to Beechwood two years later. She remembers next to nothing, and no one will talk about her accident or tell her what happened. Through resurfacing memories and writing everything down, Cadence begins to piece together what happened during Summer Fifteen.

I can't give much more away due to massive spoilers, but I will say that the ending was unexpected, at least for me. I had guesses as to what really happened to Cadence, but I was totally wrong in the end.

I love how Cadence talks about her family interactions through fairy tales she creates. I'm sure it's no coincidence that the author made three daughters in the Sinclair family, the number three being prominent in fairy tales. There are some great themes here about the price of power and wealth, relying on others for your survival instead of yourself, and about privilege in general.

Recommendations:
An excellent book that captures your attention right till the end due to the suspense of the plot. Wonderfully written with thought-provoking themes.

Thoughts on the cover:
I like the scene with the kids in the water, the image blurred enough that you can't make out anyone's specific features.
Posted by Andrea at 5:27 PM