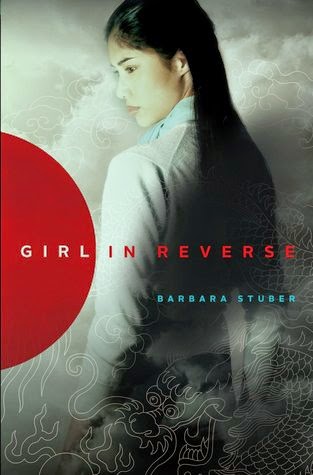 When Lily was three, her mother put her up for adoption, then disappeared without a trace.Or so Lily was told. Lily grew up in her new family and tried to forget her past. But with the Korean War raging and fear of "commies" everywhere, Lily's Asian heritage makes her a target. She is sick of the racism she faces, a fact her adoptive white parents won't take seriously. For Lily, war is everywhere - the dinner table, the halls at school, and especially within her own skin.

Then her brainy little brother, Ralph, finds a box hidden in the attic. In it is a baffling jumble of broken antiques - clues to her past left by her "Gone Mom." Lily and Ralph attempt to match these fragments with rare Chinese artifacts at the art museum. She encounters the artistic genius Elliot James, who attracts and infuriates Lily as he tries to draw out the beauty of her golden heritage. Will Lily summon the courage to confront her own remarkable creation story? The real story, and one she can know only by coming face-to-face with the truth long buried within the people she thought she knew best.

Review:
Between the time period of the early 50s during the Korean War, and the fact that the protagonist is of Asian descent (turns out later she's actually biracial), I knew I'd be picking this up.

It's 1951 in Kansas City, Missouri at the height of the Korean War. Lillian was born in 1934, then placed for adoption by her mother in 1937, shortly after which she was adopted by the Firestones. Lily is of Chinese background, a fact that her parents try to ignore rather than acknowledge, even when Lily becomes the victim of racist taunts as a child during the WWII years and then later as a teenager when the Korean War breaks out. When Lily's 11-year-old brother Ralph finds a box in their attic full of Lily's belongings from the orphanage before her adoption, it peaks both their interests in Lily's origin story. Through some interesting detective work and visits to the nearby art museum complete with an expert in Chinese art, Lily and Ralph piece together who Lily's birth mother is, why she came to the US, why she placed Lily for adoption, and even who her birth father is. As a side plot, Lily has encounters with Elliot, a boy with a talent for art, who asks her to pose for him. He ends up giving Lily a drawing that turns all the political cartoons her classmates have been using as their racist fodder back on the kids themselves (it's very clever, I'll let you read it).

The story starts out slow but quickly picks up once Lily and Ralph investigate the items in the box. I loved Ralph, he's a cute, smart little kid who steals every scene he's in. I was happy to see that the romance element was not the focus of the book, but what was there was very sweet. I think the overwhelming message of the book ends up being about the difficulties of adoption, especially trans-racial adoption during a less tolerant time (but it's still very relevant today since trans-racial adoptees still have lots of issues). The fact that Lily's parents do not acknowledge her Asian heritage and struggles with racism due to it are highlighted and shown as a negative thing for them to do as her parents, which was nice to see. There's even a heart-felt talk between Lily and her mom about why they adopted her if they were just going to ignore this huge part of her, it doesn't really resolve itself but there's the feeling that they're beginning to understand each other. I like that it didn't end happily right off the bat, because these issues are often ongoing in real life and sometimes aren't ever resolved.

Recommendation:
A coming of age story that's an interesting look back in time with a likeable protagonist. The themes of adoption and it's difficulties, particularly trans-racial adoption, really stand out and make the book relatable to modern times as well.

Thoughts on the cover:
The green-tray tinge to the cover is pleasing for some reason, and the ink outlines of the Chinese dragons along the bottom are a nice touch.
Posted by Andrea at 11:08 AM