The World Outside - Eva Wiseman 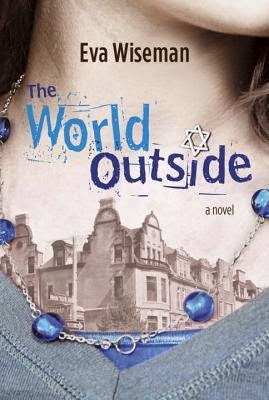 Seventeen-year-old Chanie Altman lives the sheltered life of a Lubavitcher Hasidic girl in Crown Heights, New York. Like other girls in her tight-knit, religious community, she is expected to attend a seminary and to marry as soon as she graduates from high school. But Chanie has a beautiful voice and dreams of becoming a famous singer: a career forbidden to a Hasidic girl. When she meets David, he exposes her to a world of possibility outside her fundamentalist community.

But it's August 1991 and simmering racial tensions explode into riots in Crown Heights. A tragedy occurs, and the Lubavitcher Hasidic Jews come under siege.

Will Chanie choose to stay in the world she has always known and lead a prescribed life, or will she leave it behind to follow her dreams?

Review:
This title intrigued me because even though I consider myself pretty well-versed in historical events, I had never heard of the Crown Heights Riots; I would have been eight years old when they happened.

Chanie is Jewish, from the Lubavitcher Hasidic sect, living in Crown Heights in Brooklyn. Her religion is very strict and conservative: females must be fully covered, anything secular is discouraged, and boys almost solely study religious texts to the exclusion of everything else to the point where they are nearly illiterate in the English language. Chanie is about to graduate from her girls high school where it is automatically assumed that she will go on to the seminary and then marriage. When she meets David as she and her friends are proselytizing at the mall, he is drawn to the boy and his efforts to get to know her. He encourages her gift of singing, even convincing her to apply to Julliard for a scholarship. Chanie balks tradition in other ways too: she makes friends with a black girl against her mother's wishes, goes to the public library to look up information on the Rigoletto opera, and meets with David in secret. As the events of the riots break out in August, Chanie and her family are caught up in it. There are deaths in her family which change her outlook on things. When she is actually accepted into Julliard, she is faced with a decision: does she go against her religion to pursue her great talents, or does she cling to the life she's always known?

I loved the descriptions of the Hasidic lifestyle. I have read novels that deal with the Hasidic sect before, but the particular strictness of it always amazes me. The regulations that Chanie must follow, particularly restrictive for girls, are things I could never do, especially if I knew that things could be different. The ending was definitely unique, but slightly disappointing. All signs were pointing to one outcome, but then you get a totally different result, it almost feels like the author had an agenda the whole time and copped out at the last minute. It doesn't take away from the overall enjoyment of the book, but it does leave a bad taste in my mouth.

Recommendation:
The ending was disappointing, but the rest of the book was quite enjoyable; an informing read.

Thoughts on the cover:
The Star of David alludes to the religious aspect of the book, and I'm assuming the building must be recognizable to most people, but it means nothing to me. Putting everything together with what I'm assuming is Chanie's neck and chest is an interesting take on it.
Posted by Andrea at 8:54 PM