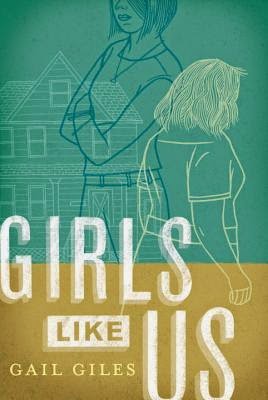 Quincy and Biddy are both graduates of their high school's special ed program, but they couldn't be more different: suspicious Quincy faces the world with her fists up, while gentle Biddy is frightened to step outside her front door. When they're thrown together as roommates in their first "real world" apartment, it initially seems like an uneasy fit. But as Biddy's past resurfaces and Quincy faces something that no one should have to go through alone, the two of them realize that they might have more in common than they thought - and more important, that they might be able to help each other move forward, together.

Hard-hitting and compassionate, Girls Like Us is a story about growing up in a world that can be cruel and finding the strength - and the support - to carry on.

Review:
This is a unique book due to the fact that the characters are developmentally delayed and/or have learning disabilities, which is a perspective you don't often see in any media, hence why I picked it up.

Quincy's impairment was caused by being smashed in the head with a brick as a child. Biddy was abandoned by her mother as an infant, left with a grandmother who looks at her with contempt. Degraded and mistreated by practically everyone in their lives, Quincy has a permanent chip on her shoulder, while Biddy is incredibly timid and blossoms when someone simply treats her civilly. Both wards of the state of Texas, they are discharged from their guardians at eighteen and placed together as part of their school's work program. They live in an apartment over Elizabeth's garage, Quincy working at the neighbourhood grocery store while Biddy helps out with the chores.

As the two live and work together, they learn valuable lessons from each other. Quincy teaches Biddy how to cook and stand up for herself, while Biddy teaches Quincy to be kind, accept help, and to trust. When traumatic events happen to both the girls, they need to rely on each other, Elizabeth, and the community to help them make it through.

This is an amazing book but was incredibly difficult to read. Statistics say that disabled people are much more likely to be victims of sexual assault, and that's exactly what unfolds in this book. The cruelty and indifference shown to these girls was so hard to see plainly conveyed, but I know that is reality for many people like them. With that said, there are graphic references to rape, assault, and behaviour that's just not right. So sensitive readers beware, but if you can see this through to the end, you'll discover a real gem here. It's even written in dialect, which adds to the authenticity

Thoughts on the cover:
I like the green and tan colour scheme with the line drawings of the girls, especially that you can't see their faces.
Posted by Andrea at 9:48 PM