The Kingdom of Wrenly: The Lost Stone - Jordan Quinn 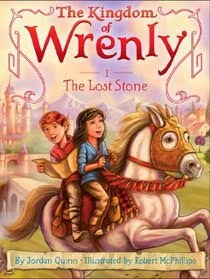 Eight-year-old Prince Lucas is lonely and wishes he could play with the other children in the kingdom, but his father, the king, has forbidden it. Lucas also longs to explore all the different lands of Wrenly. When his mother loses her prized emerald pendant, Lucas finally gets his chance! He teams up with Clara Gills, the daughter of a seamstress, and the two friends set off to find the lost stone. Will Lucas and Clara be able to find the precious jewel and claim the king's reward?

Review:
I haven't ventured into the land of chapter books in a long time, especially since I don't often teach the primary grades where kids are more apt to read them. By the time I see them in the junior grades most kids (as expected) have already moved on to middle grade books or even YA stuff for the really advanced and mature readers. But since my circle of friends has children who will soon be reading these (and my own daughter in 4 years give or take), I've been paying closer attention to the kinds of chapter books that are coming out now, aside from the usual Magic Tree House or Geronimo Stilton (I've already got a few of those on A's "big kid" bookshelf).

The Kingdom of Wrenly series is unique in that it's a high fantasy series. Usually most chapter books are straight realistic fiction with maybe some fantasy elements thrown in, but never a pure knights and dragons with trolls and fairies all rolled up into a package kind of series. I especially like that there's both a boy and a girl as the protagonists and they're good friends, which means this series is equally geared towards boys and girls (always a plus in my book). There's illustrations on every page,  and the writing on each page is big, so kids will confidently fly through the pages.

Recommendation:
A lovely new chapter book series for the primary grades (ages 6-8), kids who love fantasy worlds will adore this.

Thoughts on the cover:
Typical cover, I like the illustrator's style.
Posted by Andrea at 8:20 PM