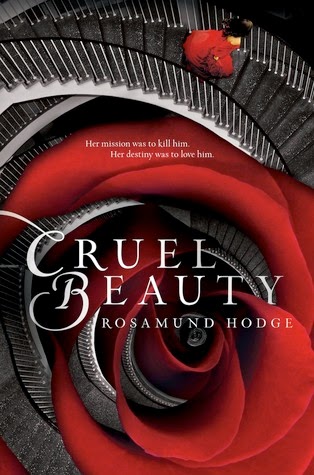 Since birth, Nyx has been betrothed to the evil ruler of her kingdom - all because of a reckless bargain her father struck. And since birth, she has been training to kill him.

Betrayed by her family yet bound to obey, Nyx rails against her fate. Still, on her seventeenth birthday, she abandons everything she's ever known to marry the all-powerful, immortal Ignifex. Her plan? Seduce him, disarm him, and break the nine-hundred-year-old curse he put on her people.

But Ignifex is not what Nyx expected. The strangely charming lord beguiles her, and his castle - a shifting  maze of of magical rooms - enthrals her. As Nyx searches for a way to free her homeland by uncovering Ignifex's secrets, she finds herself unwillingly drawn to him. But even if she can bring herself to love her sworn enemy, how can she refuse her duty to kill him?

Based on the classic fairy tale Beauty and the Beast, Cruel Beauty is a dazzling love story about our deepest desires and the power to change our destinies.

Review:
This received a lot of hype when it was released back in January, and I finally got my hands on it. In short, reading this book was an experience I savoured. I didn't read it at my normal pace because I didn't want the book to end, but I could not put it down because I swear it called to me whenever I did.

Nyx Triskelion is angry, bitter, and fiery; and she has every reason to be. Before she and her twin sister Astraia were born, their mother could not conceive a child. Their father made a bargain with the  Gentle Lord (the demon lord that has ruled Arcadia for the past 900 years), that his wife would give birth to two daughters but that he would need to choose one that would wed the Gentle Lord when she turned seventeen. As expected in similar tales, the deal backfires and their mother dies in childbirth. Since Astraia is the favoured daughter that looks like their mother, she is adored and loved while Nyx is chosen to wed the Gentle Lord. From the age of nine, her father trains her in Hermetic magic and conceives a plan to seal the demon lord in his castle, freeing the land from his influence, which would trap Nyx as well...so either way her future is a death sentence. She hates her sister for being able to be happy at her expense, but constantly feels guilty for those thoughts. She feels duty-bound to carry out the plan, but hates her father for putting her in this position and wants him to show her some remorse or fatherly affection.

So in this state of mind, Nyx is wed to Ignifex, who appears with an attractive human form except for red slitted eyes like a cat's. He gives her two rules: that every night he will give her the opportunity to guess his true name but if she guesses wrong she dies, and that she cannot go into any of the rooms in the castle that her personal key does not open. Not one to do what she's told, Nyx steals Ignifex's keys and explores the various rooms in the constantly shifting castle with Shade, the Gentle Lord's living shadow. In the midst of putting the plan into action, Nyx is nearly consumed by demons, saved by Ignifex, abandons him in the darkness that depletes him, and then rescues him. She learns about his background and how he came to be the Gentle Lord, realizing that though Ignifex is cruel and evil, he is not fully at fault for the terror he causes in Arcadia. When Nyx's plans shift to trying to uncover a way to free Ignifex from bondage, she realizes she cannot save both her husband and her country and must choose where her duty lies.

This book is all kinds of awesome for several different reasons, the main one being that the story is a mix of Beauty and the Beast and Cupid and Psyche but with a really dark undertone. There's nothing cutesy Disney here, and though I love the Disney version I also love my dark and gothic stories.

The world-building is vast, excellent, and inspired by Greek mythology, but comes on kind of fast and takes some re-reading and getting used to in the beginning of the book. The writing is, forgive my language, pornography for those that love the written word; there are quotes here that will send shivers down your spine for the pure beauty and impact of the language. I almost forgot I was reading a YA book, because it definitely did not fit the mould writing-wise.

Nyx is my favourite type of heroine: fiery, fierce, and amazingly realistic. She's pissed off and delightfully sarcastic throughout most of the book (and for good reason) and just cannot let go of the anger she feels for her family for the crap they put her through even though she really tries to. When she first meets Ignifex, she tries to stab him as per her first instinct, and then rips off her bodice and spouts lines taught to her by her aunt when she remembers she's supposed to seduce him. This very visible example of the fight between her instincts and what she "should" do encompasses Nyx for most of the book. She wants to hate her sister when she should be forgiving, she wants to clobber Ignifex when she should be the shy new wife so as not to attract undue attention to her exploring, she wants to stop everything and love Ignifex when she should be trying to kill him and save the world; I loved the theme of it. Some reviewers don't like Nyx saying she's too negative and can't make up her mind, but to me I think this just makes her more realistic as a person considering her background.

Ignifex is a charming little bastard, just the way I like my fictional men. He is an amazingly complex character with a backstory that changes the tone of the whole book. Plus, the dialogue between him and Nyx is just delicious, there were whole sections of dialogue I re-read because they were just that good. Their romance is flawed, deeply so, but it's supposed to be; and some reviewers either love it or hate it. I'm in the love category again because their love is portrayed as very realistic and realistic portrayals get my respect more than anything. Some readers will be turned off by the "love triangle" aspect with Shade, but you need not worry because it's not really a love triangle (that's as much as I can say without spoiling it).

In terms of questionable content for the younger readers, there's nothing beyond kissing and cuddling. Sex is alluded to and later confirmed but not graphically described.

The ending is one you might need to read twice to absorb it all. It kind of caught me off guard because I wasn't expecting it, but when I thought about it, it was just perfect. I love the fact that this book is a one-shot because sometimes you just get tired of series, but was strangely sad because I really wanted more of it.

Recommendation:
One of the best books I've read so far this year. This will have a coveted space on my shelf and it will continue to be deeply loved. Read this, you simply have to give it a shot.

Thoughts on the cover:
Stunning. I love how they worked the folds of the rose into the turns of the staircase, it's just perfect.
Posted by Andrea at 9:50 PM