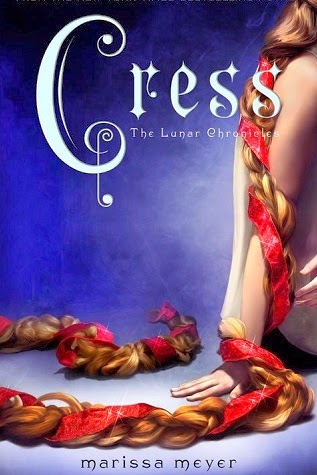 In this third book in the Lunar Chronicles, Cinder and Captain Thorne are fugitives on the run, now with Scarlet and Wolf in tow. Together, they're plotting to overthrow Queen Levana and her army.

Their best hope lies with Cress, a girl imprisoned on a satellite since childhood who's only ever had her netscreens as company. All that screen time has made Cress an excellent hacker. Unfortunately, she's just received orders from Levana to track down Cinder and her handsome accomplice.

When a daring rescue of Cress goes awry, the group is separated. Cress finally has her freedom, but it comes at a high price. Meanwhile, Queen Levana will let nothing prevent her marriage to Emperor Kai. Cress, Scarlet, and Cinder may not have signed up to save the world, but they may be the only hope the world has.

Review:
After reading Cinder and Scarlet, this has become one of my new favourite series, so picking up the rest of the books was a no-brainer.

Continuing the fairy tale theme, now we are presented with a Rapunzel character that joins Cinderella and Red Riding Hood. Cress is a Lunar shell, imprisoned at the age of 10 in an orbiting satellite between Earth and Luna. She acts as a hacker and information gatherer/Earthen spy for the Lunar government and is ordered to track down Cinder's ship. Instead, she contacts Cinder directly, pledging allegiance and asking for rescue. When the rescue is intercepted by the Lunars, Cress and Thorne are lost in the Sahara, Scarlet is taken to Luna, and Cinder and Wolf try to track down the others. Once the group is reunited, they need to come up with a plan to save Emperor Kai from his impending marriage to Queen Levana and how they're going to dethrone her and reinstate Cinder (aka Princess Selene) as the true Lunar heir.

I enjoyed this instalment a little more than Scarlet (book 2). The plot, though fractured due to the different experiences and points of view after the group is separated, was very engaging and well-written, which I didn't expect. Things are brought together really well in the end (excellent Cinder and Kai scene), and sets the stage for the conclusion in book 4, Winter.

Thoughts on the cover:
I like the continuity from the covers for books 1 and 2, with Cress off to the side so her face isn't visible, but how the red ribbon (always something red in these covers) is woven through her long hair.