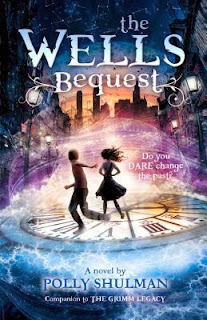 What if time travel were really possible?

When a miniature time machine appears in Leo's bedroom, he has no idea who the tiny, beautiful girl riding it is. But in the few moments before it vanishes, returning  to wherever-and whenever-it came from, he recognizes the other tiny rider: himself!

His search for the time machine, the girl, and his fate leads him to the New York Circulating Materials Repository, a magical library that lends out objects instead of books. Hidden away in the repository basement is the Wells Bequest, a secret collection of powerful objects straight out of classic science-fiction novels: robots, rockets, submarines, a shrink ray-and one very famous time machine. And when Leo's adventure of a lifetime suddenly turns deadly, he must journey to 1895 to warn real-life scientist Nikola Tesla about a dangerous invention. A race for time is on!

In this grand time-travel adventure full of paradoxes and humour, Polly Shulman gives readers a taste of how fascinating science can be, deftly blending classic science fiction elements with the contemporary fantasy world readers fell in love with in The Grimm Legacy.

Review:
I read The Grimm Legacy years ago and loved it to pieces (my copy is on my "absolute favourites that I must save in case of fire" shelf). So when I found out the author was writing a sequel/companion novel, I pretty much had a bibliophile freak-out and waited ever so patiently for the release date.

The Wells Bequest takes place several years after the events of The Grimm Legacy. All the teenaged characters from the first book are older and have obviously aged-out of their jobs as pages in the Repository, but Anjali's little sister Jaya makes a reappearance as the now head page, along with a new character, Leo. Leo's family is Russian and incredibly science-oriented, his older brother and sister got into prestigious academic schools and are researching heavy-duty stuff, while Leo (though quite intelligent as well) gets the reputation as the dumb one in the family when he doesn't get into the same schools as his siblings. While researching a science fair project and subsequently encountering his future self on a time machine, Leo discovers the Repository and falls in love both with it and Jaya. After managing to get himself a job as a page and uncovering the secret of the Special Collections, Leo starts to uncover what his future self was trying to tell him and how to get H. G. Wells' time machine to work. Cue a whirlwind adventure to 1895 with scientists (and Mark Twain!) and mind-bending paradoxes about time travel (I've read my share of time-travel stuff and even I had to re-read parts), and you've got a really satisfying story.

I loved revisiting the novel's universe with the Repository, it's just amazingly fun and the stuff of daydreams. I appreciated the addition of a male main character this time around since The Grimm Legacy had a female protagonist, and it helps that Leo is smart but still very much a realistic teenaged boy with insecurities that loves his video games. The whole novel is very much an homage to intelligence of all kinds, the characters are not only well-read but are musically inclined and science and math oriented, and this is shown as a positive thing which is isn't often the case with middle-grade or YA. The characters are also multi-cultural and diverse: Leo is Russian, Jaya's family is Indian, and Marc (who makes a reappearance) is black, so diversity both in culture and gender is always a plus for me. The romance between Leo and Jaya, while one of the cutest I have seen, is a great example for young readers. Leo and Jaya treat each other respectfully and Leo says often that he likes Jaya because she's insanely smart (not to mention funny and brave), which is refreshingly different from most scenarios where girls are encouraged to dumb themselves down due to the fear that boys won't like intelligent girls. Plus, there's Mark Twain, and any book that incorporates Mark Twain automatically gets a thumbs-up from me.

Recommendation:
A wonderfully written, satisfying story; everyone needs to read the first book (The Grimm Legacy) and this new instalment and gets as hooked as I did.

Thoughts on the cover:
I like the continuation in style from The Grimm Legacy cover, plus the visualization of how the time travel actually occurs was interesting to see. I also like how Leo and Jaya are darkened so you can't actually see their faces or what they're wearing.
Posted by Andrea at 9:45 PM