The Boy on the Wooden Box: How the Impossible Became Possible...on Schindler's List - Leon Leyson 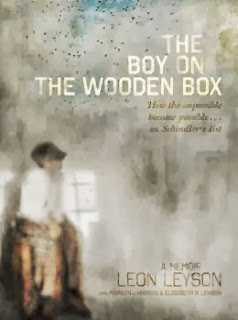 "Not even the scariest of fairy tales could have prepared me for the monsters I would confront while just a boy of ten...or for the hero, disguised as a monster himself, who would save my life."

Leon Leyson loved playing on the Krakow streetcars with his friends and tagging along after his older brothers...

Then, suddenly, German soldiers were:
In his country.
In his city.
In his home.

Seemingly overnight, the life he knew vanished. The Third Reich wanted him, and every other Jew in Europe, dead.

The darkest of times can unleash the worst in human nature-and also the best. Leon Leyson lived through those times. Forced from home to ghetto to concentration camps, separated from his family for months, he experienced things that no child should ever experience. But there was one thing that could never be torn away: his will to survive. And one man-one Nazi-showed him that hope can come in the most unexpected way. That man was Oskar Schindler; his famous "list" would mean life for Leon and for more than a thousand other Jews caught in the Nazis' net.

The Boy on the Wooden Box is a tour de force-a legacy of hope and a call for all of us to remember those who didn't get a chance for tomorrow.

Review:
I picked this up in another attempt to work more non-fiction in my reading pile, and of course I can't turn down a Holocaust book.

This is a memoir written by Leon Leyson, one of the youngest Schindler's List members. It begins with his childhood in rural eastern Poland, his family's move to Krakow in 1938, and the increasing restrictions with the invasion of the Nazis in 1939 which lead to the Leyson family being moved from ghetto to concentration camps and eventually being saved by being workers in Oskar Schindler's factory.

I liked how the author goes into detail about exactly what it meant for Schindler to help the Jews by doing what he did. I've seen the film Schindler's List so many times, we use it in our schools fairly often, and I never fully believed that Schindler acted in a truly selfless manner, it seemed like he must have gotten something out of it like the free labour. Granted my only impression of the figure is from the movie, but that was my impression nonetheless. This book really reinforced that Schindler didn't actually get any monetary advantage from his workers, and in fact spent what remained of his fortune bribing other Nazis relating to the care of his workers and on food for them. So I now have more respect for Schindler based on this interpretation.

I also liked how the memoir goes into what happened to Leyson after the war when he settled in the United States, how hard it was to talk about what he'd been through with others because people didn't couldn't even comprehend what happened because there was almost no words to effectively describe it.

Recommendation:
A wonderfully engaging memoir of a Jewish boy who survived the war because of Oskar Schindler.

Thoughts on the cover:
I like the faded watercolour look here, not enough to see detail but enough to know what you're looking at.
Posted by Andrea at 9:20 PM