Our Rights: How Kids are Changing the World - Janet Wilson 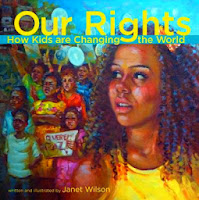 A girl who spoke out against her government for the rights of aboriginal children, a boy who walked across his country to raise awareness of homelessness, and a former child soldier who wants to make music not war...

Here are true stories of kids just like you who are standing up for their rights. Read about how they have made a difference.

Dylan Mahalingham from the USA started an online charity to raise money to fight child poverty. The bravery of Nujood Ali from Yemen inspired other girls who were being forced to marry too young. Anita Khushwaha from India became a beekeeper to pay for school, even though it was considered a job only men could do. All of them are making a difference for children's rights, and you can too.

Review:
My to-read pile has been severely lacking in non-fiction lately, so I perused the library and saw this lovely piece. We reinforce to our students all the time that even one person can create lasting change, and this book is a prime example of the amazing things children and teenagers can do when they want things to change in their world.

The book is a quick read, the reading level is probably around middle grade but the content is more than applicable for young adults as well. The book is laid out like so: each two-page spread is dedicated to a young person and their accomplishments relating to furthering the cause of children's rights in their country. There is a section relating directly to the person featured and another section relating to relaying information on the overall issue the person was fighting against. The topics covered are vast, from child poverty and homelessness, the rights of aboriginal children and child brides, to the right of children to have a birth certificate. Countries represented are varied as well, and I'm pretty sure I counted blurbs from every continent (except Antarctica of course). Some of the children featured are already known to some readers, some I recognized were: Malala Yousafzai, Nujood Ali, Zach Bonner, and Craig Kielburger.

The thing I liked was that not all the children represented did amazingly huge things like start their own charities and have huge movements attached to their names (some do but not all), because sometimes that's intimidating for kids that think you need to do those things to make any difference so why bother trying. A lot of these children did very simple things as individuals, like the girl in India who refused to be married at 15 and bought beekeeping kits for herself so she could work, and other girls followed her example.

Recommendation:
This is a great book for older kids and teenagers to reinforce the idea of standing up for what you believe in, and that any small change can make a lasting difference. This is a book I'd recommend for parents to read to their kids and for teachers to have in their classrooms.

Thoughts on the cover:
The author is also the illustrator, and she makes some wonderful painting-style illustrations of the kids she describes, one of which is the cover image.
Posted by Andrea at 8:38 PM