The Prince Who Walked With Lions - Elizabeth Laird 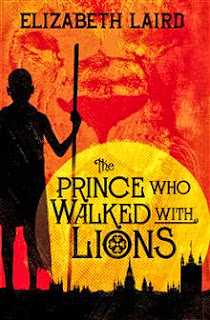 War has torn Prince Alamayu's world apart. His father, the Emperor of Abyssinia, has been killed by the British, who have decided to take the young prince home with them and educate him as an English gentleman.

Alamayu is a brilliant sportsman, and soon earns the love and respect of many. To the ignorant bullies at school, though, he is no better than a slave. But Alamayu is a Prince. Can he conquer his fear and show his tormentors that he has the heart -and the courage-of a lion?

Review:
This is an interesting piece of historical fiction about colonization and empires, devastation of cultures, and xenophobia and racism. Alamayu is a young prince of Abyssinia (Ethiopia) in the late 19th century when Britain invades. After his father commits suicide and his mother dies of consumption, Alamayu is taken to Britain to be made into a "proper English boy".

Between missing his parents, culture, and homeland, and trying to fit into a society where most people don't see beyond his skin colour, Alamayu has a rough time adjusting to say the least. The story is a wonderful commentary on the consequences of colonialism and the dangers of building an empire on the conquered people. Alamayu spent more than 10 years in Britain, forgetting his native language and cut off from the remainder of his family at the expense of colonial expansion. This puts a very human face to things most of us only read about and rarely consider on a deeper level.

Thoughts on the cover:
I like the silhouette of Alamayu with the British cityscape along the bottom with the lion superimposed in the background.
Posted by Andrea at 8:16 PM