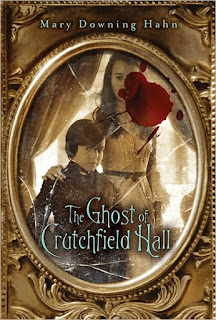 When twelve-year-old Florence boards the horse-drawn coach in London, she looks forward to her new life at Crutchfield Hall, her great-uncle's manor house in the English countryside. Anything will be better, Florence thinks, than the grim London orphanage she has just left.

Florence doesn't reckon with the eerie presence the haunts the cavernous rooms and dimly lit hallways of Crutchfield. It's the ghost of her cousin Sophia, who died the year before. Sophia's ghost seeks to recreate the scene of her death and cause someone else to die in her place so that she will be restored to life. And she intends to force Florence to help her.

Review:
It was book fair season recently at my schools and this was one of the books I picked up. It's short, so it's a very quick read; but a perfect scary story for middle-grade readers.

In 19th century England, orphaned Florence is sent to Crutchfield after being tracked down by a long-lost relative. Things are unsettling from the beginning: being mistaken for her dead cousin Sophia, immediately disliked by her aunt, being left to her own devices in a huge manor house (like Mary in The Secret Garden), and being creeped out by strange laughs she hears (like Jane in Jane Eyre). Once she encounters Sophia and her power to make people do her bidding, Florence becomes a player in Sophia's twisted game of revenge and retribution.

The book is very short, so the plot moves very quickly, there's a lot of outright telling versus showing in terms of the writing style, and the characters aren't given enough 'screen time' to really develop; but since it is a middle grade novel I can forgive those things, especially since most kids will be so wrapped up in the ghost story aspect they won't be focusing on the other parts.

The author evokes a lot of other classic stories here, from Jane Eyre to The Secret Garden, and older horror stories like The Turn of the Screw and those from Edgar Allen Poe. Granted, these references will go over most young readers' heads (unless they're amazingly well read), but adults and teachers will appreciate them.

Recommendation:
Wonderful quick read for kids that like scary stories. You might want to skip this if you've got sensitive readers though. Although Sophia's death itself is not particularly violent, the pure hatred for her brother is thinly veiled, and the plot to get James to die in her place is kinda twisted.

Thoughts on the cover:
I love it. A take on the classic Victorian portrait photo in an oval frame, but with shattered glass and with drops of blood is a great way to draw readers in.
Posted by Andrea at 1:36 PM