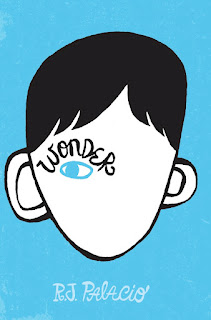 Don't judge a book boy by it's cover his face.

August (Auggie) Pullman was born with a facial deformity that prevented him from going to a mainstream school-until now. He's about to enter fifth grade at Beecher Prep, and if you've ever been the new kid, then you know how hard that can be. The thing is, Auggie's just an ordinary kid with an extraordinary face. But can he convince his new classmates that he's just like them, despite appearances?

Review:
This book has been passed around my local schools like pixie sticks or some other addictive substance. And now that I've read it, I know exactly why. This book, like it's title, is a wonder. It encapsulates such subtle yet important messages about kindness and tolerance and packages it in format that's accessible to kids. I work in Catholic schools and we try to convey these ideas to our students all the time, but sometimes the methods we use don't even resonate with adults let alone children. There was a point in the book where a character talks about a quote about seeing the face of God when people are kind, and though I've encountered that exact same idea before, it was only in reading that passage that the understanding of it hit me like a freight train.

Auggie's experiences and those of his family and classmates, told in multiple points of view that move the story forward, reinforce that our actions do have profound effects both good and bad, and that there's a difference between just 'being nice' and making a conscious decision to be kind.

Recommendation:
Well-written, engaging, wonderful characters, and just an amazing story altogether. You have to read Wonder, just trust me on this one.

Thoughts on the cover:
A very clever way of using Auggie's face without actually showing his face. There are other character portraits done in the same style throughout the book.
Posted by Andrea at 10:27 PM