Summary:
From Amazon.ca:
Col is a wealthy child of privilege. Raised to succeed his grandfather as the Supreme Commander of the juggernaut Worldshaker, he has lived a pampered life on the Upper Decks. He has never questioned his place in the world or his bright and illustrious future. But when a Filthy girl stows away in his cabin, suddenly nothing is clear anymore. Quick and clever, Riff is nothing like the Filthies that Col always learned about—the dumb, slow, less-than-human folk who toil away Below, keeping Worldshaker moving. Filthies are supposed to be animal-like, without the power of speech or the ability to think for themselves—but Riff is clever and quick and outspoken, and Col is drawn to her despite himself.
As Col begins to secretly spend more time with Riff, he begins to question everything he was raised to believe was true, and realizes that if Riff is right, then everything he was raised to believe is a lie. And Col himself may be the only person in a position to do something about it—even if it means risking his future.

Review:
I picked up Worldshaker because I realized I'd been reading way too much girly YA (supernatural romance, fairies, etc.). As an aunt to three teenage nephews (to to mention teaching boys every single day), I figured I needed to expand my repertoire of books boys would actually like. In YA fiction right now, steampunk is for boys what supernatural romance is for girls, so I figured it was a good bet.

Worldshaker takes place about 150 years after the reign of Queen Victoria as we know her, where her successor, Queen Victoria II rules on Worldshaker. All the major superpowers from the Victorian era (Germany, Britain, Russia, etc.) have taken to the air in giant flying airships (juggernauts), complete with their own caste system. The elite families on Worldshaker live on the Upper Decks while the Filthies toil below. The elites are taught that the Filthies are like animals, uncivilized and incapable of language. When Col Porpentine is named successor to his grandfather, the most powerful man on Worldshaker after the queen, his future is secure. But when a Filthy girl named Riff escapes from below and hides out in his cabin, he discovers that Filthies can speak, among other things. Col gets caught up in Riff's plans for revolution, discovering more about himself and his affections for her as he goes along.

Worldshaker starts out very different than I expected it to. Based on the premise, I thought it would be written more seriously, and towards the end it is, but in the beginning everything is just so ridiculous on so many levels that I nearly stopped reading it. Thankfully the ridiculous scenarios, language, and characters are purely a setup to make the subtle change throughout the novel all the more appreciated. When the mood of the novel turns from silly to serious (and at times bloody), the change is all the more stark. Col goes from a pampered yet good-natured child acting much younger than his 16 years, to a young man turned fighter who fights for what he thinks is right.

Again, the novel's slow to start, but once its gets going it's pretty good; the writing is decent, the characters are fairly well-rounded (Riff is a little flat but we don't exactly see that much of her), and it'll appeal to boys especially.

Recommendation:
A nice example of steampunk for the younger set. This gets a little bloody towards the end, so keep that in mind, but it does a good job of playing around with history and examining politics and issues of class and revolution. 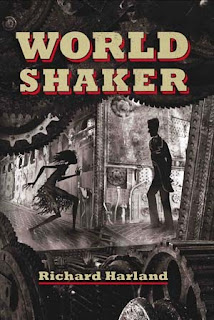 There is a ton of artwork for this book. The author's website has links to artist illustrations of various parts of Worldshaker (the juggernaut) itself. The inside cover has a diagram of the ship with nice details. The cover itself has a nice image of Col and Riff against the ship facade. Although the North American cover is pretty, I'm kind of partial to the Australian cover, shown to the left.
Posted by Andrea at 8:39 PM