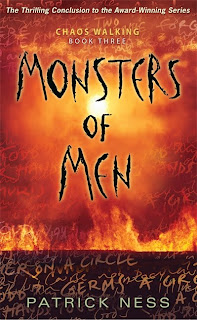 Summary:
From the inside cover:
In the electrifying finale to the to the multi-award-winning Chaos Walking trilogy, the choices of one boy and one girl will decide the fate of a world.

As a world-ending war surges to life around them, Todd and Viola face monstrous decisions. The indigenous Spackle, thinking and acting as one, have mobilized to avenge their murdered people. Ruthless human leaders prepare to defend their factions at all costs, even as a convoy of new settlers approaches. And as the ceaseless Noise lays all thoughts bare, the projected will of the few threatens to overwhelm the desperate desire of the many. The consequences of each action, each word, are unspeakably vast: To follow a tyrant or a terrorist? To save the life of the one you love or thousands of strangers? To believe in redemption or assume it is lost?

Becoming adults amid the turmoil, Todd and Viola question all they have known, racing through horror and outrage towards a shocking finale.

Review:
If you haven't read The Knife of Never Letting Go and The Ask and The Answer, go read them...seriously, do it. These books aren't just stories, they're an experience. Much like Mockingjay, the third installment of The Hunger Games trilogy, Monsters of Men focuses on the act of war itself and its effects on people. The title "Monsters of Men" comes from the quote often said by characters in the previous two books, "War makes monsters of men." With a title like that, you know you're in for some seriously disturbing content.

The book opens with the organized Spackle army marching on New Prentisstown just as a scout ship of people from Viola's home arrive to search for her. Simone and Bradley from the ship are urged by Mistress Coyle to aid The Answer in the war, while Viola wouldn't trust Mistress Coyle if her life depended on it. When the Spackle army threaten Todd, Viola is spurned into action to delay the Spackle long enough for the citizens of New Prentisstown and The Answer to collaborate for peace talks. So amidst the Spackle being a constant threat, the Mayor and Mistress Coyle are still at each other's throats and refuse to trust the other (and for good reason). Throw in the Mayor still trying to corrupt Todd, and being so darn convincing of his redemptive qualities, and you've got conflict from all angles.

Narration is done through three first person narratives: Todd, Viola, and one of the Spackle (Todd's #1017 from the previous novel). Unlike The Ask and The Answer where Todd and Viola's narration alternated by chapters, Monsters of Men sees Todd and Viola alternating in much shorter increments, sometimes many times within the same chapter, and when you add the Spackle narration (usually in its own divided section, it makes for a very frenetic feel to the story, which fits nicely with the mood of the novel. I think the aspect of Monsters of Men that stands out the most for me is the wonderful character development of the Mayor. The author layers him so amazingly well that readers actually begin to believe that he can be redeemed, he worms his way into Todd's consciousness oh so seamlessly. I also like how Todd is shown actually wavering in his morality and commitment. The Mayor shows him a taste of true power and Todd hears himself admitting that he likes it before telling himself to shut up.

I can't say much more for fear of spoilers (I find this happens a lot when I review all of a series), but I can guarantee that this novel will invoke reactions similar the The Knife of Never Letting Go and The Ask and The Answer, possibly even more heightened reactions. War is made personal, characters are not above killing to save a loved one, but at the same time it explores that no one can afford to be a saint when faced with certain situations, that there is no "us" and "them" because based on their actions, everyone is nearly indistinguishable. Todd and Viola realize that everyone is capable of doing horrible things, that they aren't above those things they detest, but refusing to do them while admitting you have the power to do so is what makes you a better human being.

As a side note, the author is not afraid to pull any punches, so you never quite know what to expect...the ending caught me off guard, and I wasn't happy about it, but it is appropriate for finishing off the series.

Recommendation:
YES. All kinds of yes. Just read all three of them if you haven't done so already, this series is pure gold.

Thoughts on the cover:
Keeping with the same elements as in the previous two covers, the jagged title font contrats with the Noise font in the background. The Noise all over the covers makes these wonderfully appropriate and unique to the series, it's just very clever I find. Good continuity for all these three too, I can't imagine a different set of covers.
Posted by Andrea at 9:44 PM