This World We Live In - Susan Beth Pfeffer 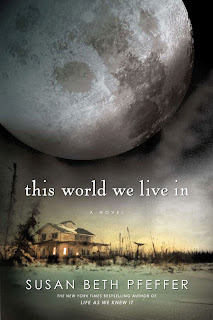 Summary:
From Amazon.com:
It's been a year since a meteor collided with the moon, catastrophically altering the earth's climate. For Miranda Evans, life as she knew it no longer exists. Her friends and neighbors are dead, the landscape is frozen, and food is increasingly scarce.
The struggle to survive intensifies when Miranda's father and stepmother arrive with a baby and three strangers in tow. One of the newcomers is Alex Morales, and as Miranda's complicated feelings for him turn to love, his plans for his future thwart their relationship. Then a devastating tornado hits the town of Howell, and Miranda makes a decision that will change their lives forever.

Review:
After plowing through the first two books in the series, Life As We Knew It, and The Dead & The Gone, picking up the third book was a no-brainer, especially since it deals with both sets of characters from the first and second books. This World We Live In was shorter than the previous two, so it took less time to get through, but I didn't enjoy it as much as the previous two. I knew as soon as I found out that Miranda and Alex would meet in the third book that they'd be romantically involved, and I have no issue with that (when you're one of the last teenage girls or boys on earth you aren't exactly going to be picky about who you want to be your boyfriend/girlfriend). The romance, however, wasn't very well developed. Again, I can understand two people just getting together for the heck of it in a desperate situation like the one they're in, but it feels really sloppy...Alex and Miranda are fighting and all of a sudden he kisses her and then they're mutually in love...huh? I'm sorry, but the whole thing needs to be more believable, even as a "desperate situation romance" thingie. I liked the issues the book brought up: feeding more people, trusting people that aren't family, and the necessity of moving somewhere safer but the reluctance to leave your home. The book deals with a lot of the same issues as the previous books and the only new issues come about as a result of the two sets of characters merging together, and a lot of that is the romance issues between the various couples, so it isn't as impressive as the previous books.

Recommendation:
Not as impressive as the first two books, but you'll want to read it to find out what happens to Miranda's and Alex's families.

Thoughts on the cover:
Love the continuity these covers have. This one focuses back on the Evans' house in Pennsylvania looking more than a little ragged.
Posted by Andrea at 2:05 PM