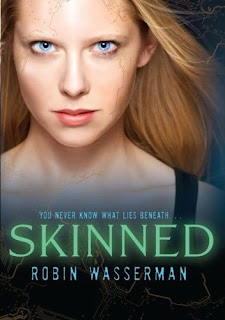 Dying was bad enough. But it was better than what came next...

Lia Kahn was perfect: rich, beautiful, popular -- until the accident that nearly killed her. Now she has been downloaded into a new body that only looks human. Lia will never feel pain again, she will never age, and she can't ever truly die. But she is also rejected by her friends, betrayed by her boyfriend, and alienated from her old life.

Forced to the fringes of society, Lia joins others like her. But they are looked at as freaks. They are hated...and feared. They are everything but human, and according to most people, this is the ultimate crime -- for which they must pay the ultimate price.

Review:
More science fiction than dystopian (though there's quite a few dystopian elements in this), this series is a theologist's dream. Lia lives in a world where children are selected from birth. Their sex, their hair and eye colour, their body-mass index, their IQ, and their looks are all chosen for them to ensure optimum advantages in life. Credit is everything, diseases and mutations are screened out, everyone lives their lives through devices call ViMs (basically glorified iPhones) and even the cars drive themselves. On Lia's last day however, a truck malfunctions and crashes into Lia as she goes to fill in for her sister at her daycare job. Lia is mortally wounded and has little hope of recovering. Desperate, Lia's parents employ a new technology that turns Lia into a cyborg, keeping her brain, personality, and memories into a completely mechanical body. Called Skinners and Mech-Heads, those like Lia aren't look upon kindly by those in her futuristic society-especially by the Faithers (what we would call Bible Thumpers). Everyone's uncomfortable with the new Lia, she's abandoned by her friends, dumped by her boyfriend, and even the other mechs resent her for not embracing her new self.

A lot of the book is simply Lia being introspective about whether she still considers herself human. Although she still retains her memory and personality, she cannot eat, sleep, feel pain, or experience any of the bodily reactions to stimuli she used to. She'll never die either...if her body malfunctions she can be transfered into another body. She knows she's not like humans anymore, but she isn't quite like the other mechs either, so she's not sure where she belongs. This would be a great book to discuss in a psychology or a theology class since the basic question is repeated in various forms over and over again: If you don't have a human body but have the brain/memory/personality of one, does it make you human? Lia gets into an interesting discussion with one of the Faithers where he essentially tells her that she's programmed, she insists she's not, he asks her how she knows she has free will, she retorts that he can't be sure he has it either. In a way, the whole process makes Lia more human because she begins to care less about what other people think, becomes less self-absorbed, and less materialistic...unfortunately every living person in Lia's time is all of those things so it doesn't help her case much.

The novel focuses a lot on these types of deep questions and is slow to get the plot moving, so by the time things get a move on you're practically screaming "Yes, I get it, you're different now, just move on with it!", but then things start happening rather quickly so it makes up for it.

Recommendation:
If you're in the mood for a philosophical sci-fi book, read this! This is the first book in a trilogy, so I'll be picking up the other two to see what happens with Lia's story.

Thoughts on the cover:
Love it. It's difficult to see in the image I posted, but if you turn the cover around in the light, you see shiny imprinted images of circuit boards all over Lia's face and body. I like how the cover shows Lia's new body with her unnatural blue eyes.
Posted by Andrea at 7:39 PM