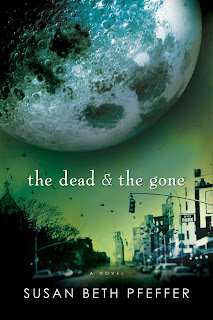 Summary:
From Amazon.com:
Susan Beth Pfeffer’s Life as We Knew It enthralled and devastated readers with its brutal but hopeful look at an apocalyptic event--an asteroid hitting the moon, setting off a tailspin of horrific climate changes. Now this harrowing companion novel examines the same events as they unfold in New York City, revealed through the eyes of seventeen-year-old Puerto Rican Alex Morales. When Alex's parents disappear in the aftermath of tidal waves, he must care for his two younger sisters, even as Manhattan becomes a deadly wasteland, and food and aid dwindle.

With haunting themes of family, faith, personal change, and courage, this powerful new novel explores how a young man takes on unimaginable responsibilities.

Review:
I loved Life As We Knew It. It made me laugh a little, made me cry more, and also made me want to rush out and stock up on canned soup (seriously, you should see our cupboards now, I could run a food bank). Aside from making me realize we're nowhere near prepared enough for a disaster such as what Miranda's family experiences, I've always loved survival stories and this one was addictive. The Dead & The Gone takes place during the same events of Life As We Knew It, but as a companion novel it takes place in a different location and focused on a different set of characters. Alex Morales lives with his mother, father, and two younger sisters in New York City. On the day the meteor hits the moon, Alex's father is in Puerto Rico for a family funeral, his mother is working at her job at a hospital in Queens, and his older brother Carlos is deployed as a Marine. After his aunt and uncle help him gather canned food for storage and later move away, Alex, Bri, and Julie are left to fend for themselves with only their schools and church to depend on. As food dwindles and resources are scarce, Alex and his sisters rely on their faith to sustain them (in addition to the lunch provided at school and the free bags of food once a week that they stand in line for hours for). When the very air they breathe becomes close to poisonous, Alex makes a plan to take his sisters and escape from the city...the only question is how to do so when he has no connections to rely on.

I really liked how the author chose to focus on how a character from completely different circumstances would survive in the same situation. I also liked how she shows how different locations responded to the disaster. New York City saw more of the daily reminder of the death and destruction than Pennsylvania did; Alex and his sisters see corpses eaten by rats in the streets every day whereas Miranda's family's experiences were mostly contained to their individual home and rarely saw the effects on other people. Alex and his sisters also have a better network of support than Miranda's family did. Whereas Miranda's mother was very untrusting and imposed that on her children, Alex and his friends help each other out and he benefits from aid programs from the school and church.

That's not to say Alex's experience is any easier: he alone is responsible for his sisters, he takes on the gruesome task of body looting to barter goods for food to feed his family, he is never quite sure what happened to his parents, and he has to deal with Bri's health issue. The way the author handled the religion issue was well done. I went to catholic schools growing up, and the way the school and church spoke to the students and congregation reminded me of what we would hear in the midst of some crisis. Whereas Miranda handled things by coming up with a reason to hope, Alex's way of coping was praying; so I like how the author showed a religious response in one book and a secular but still spiritual response in the other.

Apparently Alex and Miranda cross paths in the third and final book, so I'm picking that one up next (this series is sooooo addictive!).

Recommendation:
Same advice as the first one, just read this, trust me. Just read them in order or else you'll miss out on certain nuances.

Thoughts on the cover:
Same focus on the moon as the first cover, but with a different but still eerie colour scheme and a city scape to reflect New York City. These covers are very appropriate for these books I think, I just really like them.
Posted by Andrea at 8:00 PM