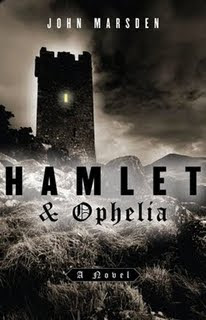 Summary:
From the inside cover:
Coping with the death of his father and reeling from the marriage of his mother to his uncle, Hamlet has an encounter with his father's ghost, who reveals the truth: he was murdered--by his brother! Urged by his father to seek revenge, Hamlet is wracked with indecision and spirals into depression. It seems that not even his best friend, Horatio, nor his love interest, Ophelia, can help him. A visiting acting troupe inspires Hamlet to form a plan, but he cannot foresee the devastation that will occur.
Hamlet and Ophelia is a compelling read for teens and adults alike--sexy, sultry, spellbinding. In following the contours of Shakespeare's play, John Marsden has created a stunning tale that brings new life to a timeless classic.

Review:
I was very fortunate in high school-I had one of the best English teachers on the face of the planet. After hating Shakespeare in Grade 9 while suffering through The Merchant of Venice with a different teacher, he finally made me appreciate Shakespeare in Grade 10 when we did Julius Caesar with him. Although he taught me to appreciate Shakespeare for the usual reasons: themes that resonate hundreds of years later, humour (once you translate it into everyday English), excellent writing etc., I never really liked Shakespeare. That same English teacher taught us Hamlet in Grade 13 and to be honest, I'd rather have been reading something else other than more Shakespeare. This retelling of Hamlet made me love it. I kept reading to see what would happen, even though I already knew exactly what would happen. John Marsden has written a wonderful novel, changing the dialogue to be easily read but not conversational (sounds like a 19th century classic rather than Shakespearean English), staying true to the original plot, and even keeping some of the key lines. Marsden wrote "Tomorrow When the War Began", and was one of my favourite authors when I was in high school along with Garth Nix, Tamora Pierce, and Patricia Wrede; so I knew that picking this up wouldn't be a mistake. Glad to see his writing is still excellent after a 10 year absence on my part.

Recommendation:
For all those kids out there in Grade 12 who are made to suffer Hamlet just like I once was, or for the adults who'd really like to defy the stereotype of the person who forever hates Shakespeare, pick this up, I guarantee you'll find this version more to your liking than the original.

Thoughts on the cover:
The Canadian version of this novel has a different cover, as well as a different title. The original Australian version was called simply "Hamlet" and had the image of the famous skull as the cover. I must say I like our Canadian version better. Retitled "Hamlet and Ophelia", the cover has the image of Elsinore castle (well, part of it) and the barren lands surrounding it. This cover emphasizes the subtle ghastly qualities rather than being blunt with just the skull.
Posted by Andrea at 6:42 PM