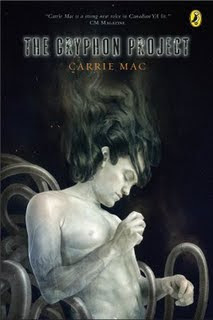 Summary:
From the author's website:
Phoenix envies her brother Gryphon. The daredevil, gangrunning sports hero has all of his recons left: three more chances at life. But she is left with only one, and learns that her beloved brother is responsible for one of her deaths. When Gryphon himself has an accident, the governing body Chrysalis refuses to recon him, deeming his death to be a suicide. His gang’s code of silence makes it difficult to find out the details, but Phoenix is determined to unravel the mystery and save her brother.

Review:
In Gryphon and Phoenix's world, scientists have beaten death through Reconning, using cord blood and other stem cells to reconstruct flesh and bring a person back from the dead free of imperfections. Not everyone gets the three recons though, the author includes a caste system for all this: doctors, lawyers, politicians etc. get three; academics, accountants etc. get two; next level gets one, and the scum of the earth get no recons. There are also rules: suicides are not reconned, you can only be reconned between the ages of 6 months and 65 years, and anyone causing the death of another person is deconned (immediately killed and not revived). I love this part of the book, the universe created around this notion that death is not final. The three-pers live in the richest communities while the no-pers live in slums, and as you can guess, people generally associate with their own 'kind' and snub their noses at those with less recons. I loved this, it was amazingly detailed and realistic. I even appreciated the part where Phoenix reads to her sister Fawn from a physical book when everyone uses pods (portable media devices) for their music, reading, and information sharing.

Now on to what I wasn't nuts about. Before Gryphon dies, his behaviour alarms Phoenix and she tries to get information from his friends about what's up with her brother. Saul, Tariq, Huy, and Neko are all part of Gryphon's circle of friends and most of them are pretty well fleshed out secondary characters, save for Huy. I was glad the author made one of her characters openly gay (you don't see enough gay characters in YA fiction), but I wish she had given him more of a personality beyond being "the queer" with nothing else to add to that, he was very flat in terms of character development. Aside from the issue of Huy, the action during the middle of the plot really annoyed me. Phoenix is trying to understand the circumstances of Gryphon's death and she knows the boys know something, but they refuse to tell her. Scene after scene can be summed up as such: "You know something, tell me damnit!"...."No Phee, I can't tell you"...."You tell me or else!"...."No, I can't tell you, not yet". It goes on like that for countless pages until someone breaks and tells Phee what the heck is going on; I'd rather have been in on the plot as a reader and not have to wait until someone bothers to explain it to Phoenix, it was annoying. One last thing: I don't know why but I kept reading this book like a first person narration even though it was done in third person, everything was from Phoenix's point of view but not narrated by her, so my brain kept getting confused by the personal pronouns not referring to who I thought they referred to. One personal thing that irked me: when Phoenix finds out that Gryphon was the cause of her second death at the age of six, she isn't the least bit angry at him. And it wasn't accidental either, when an 8 year old pushes his 6 year old sister into a river and drowns, all because he's curious about death, I'd be pretty pissed, I wouldn't care how much time had passed or that I was reconned. Phoenix could have at least made some grand speech about it or something.

Recommendation:
Well written science fiction story with amazing detail and thought, with a few blemishes (but still overly excellent). Themes of the value of life and equality amongst social classes make this novel rife with discussion.

Thoughts on the cover:
This cover is all kinds of awesome, seriously, I am in love with this cover. Gryphon in stasis after being reconstructed after the accident, plugged into various tubes. The artist (Sam Weber) managed to draw Gryphon as if he were floating, his hair tangled above his head, his limbs and muscles relaxed. I even love the pout Gryphon has on his face. Can you tell I love this cover?
Posted by Andrea at 4:29 PM