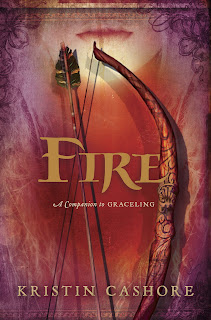 Summary:
From the inside jacket:
It is not a peaceful time in the Dells. The young king Nash clings to his throne while rebel lords in the north and south build armies to unseat him. The mountains are filled with spies and thieves and lawless men. This is where Fire lives. With a wild, irresistible appearance and hair the colour of flame, Fire is the last remaining human monster. Equally hated and adored, she has the unique ability to control minds, but she guards her power, unwilling to steal the secrets of innocent people. Especially when she has so many of her own. Then Prince Brigan comes to bring her to King City. The royal family needs her help to uncover the plot against the king. Far from home, Fire begins to realize there's more to her power than she ever dreamed. Her power could save the kingdom. If only she weren't afraid of becoming the monster her father was.

Review:
Normally I wouldn't review a sequel even if I read it. I figure if a person liked the first book they should like the second, third etc., provided the author's skills don't drop off the face of the earth (which has been known to happen in sequels). I made an exception for Fire because although it's the second book in Cashore's Graceling trilogy of novels, it's more of a companion book, taking place 30 years earlier in another kingdom with an entirely new set of characters (except one). You don't need to read Graceling to enjoy Fire, but with the inclusion of that one shared character, you won't get the full effect unless you read Graceling first.

Let's iron out a few key points: In Fire's world, there are humans and "monsters". Monsters can look like any ordinary animal except for their brilliant colouring. Like they say in the book, a grey horse is just a horse, but a horse the colour of sunset orange is a monster. Monsters will hunger for other monster flesh before going after humans, and their beautiful colours act almost like a hypnotizing effect that turns humans into blubbering fools. Human-shaped monsters have the ability to read and control minds, which is what Fire is. Her hair is her main area of control, which is why she keeps her hair bound in a wrap most of the time. Fire is trying to escape the legacy of Lord Cansrel, her monster father who was advisor to King Nax (current king's deceased father). Her father was a monster in all manner of the word, he enjoyed cruelty and encouraged Fire to do so also. Long story short, Fire's mother died in childbirth so she was spirited away to be looked after by a number of people in the north because her father couldn't look after her in King City. It's because of all those people that raised her that Fire has a kinder personality than her father and is reluctant to use her mind-control powers on others except in self-defense. Prince Brigan and King Nash (brothers) come and beg her to help them defeat the rebel armies by helping to interrogate captured spies. And here's where Fire's issue lies: she is reluctant to use her powers for fear she will become like her father, like most people assume she already is.

Fire is a very different book from Graceling. Fire is much darker story, where Graceling was a little more light-hearted. Fire is driven almost purely by the title character's quest to discover herself, whereas Graceling is balanced with character development and plot. Different, but not in a bad way.

I think the novel would fail in my eyes without Fire herself. The things she goes through, especially in the first part of the book shocked me. How would you feel if you were constantly under attack by monsters that wanted to rip you apart, and humans either want to rape you because they love you, or rape you because they hate you? Fire gets those reactions in both extremes. She is inhumanly beautiful and unless a person guards their mind against her, her beauty causes them to literally throw themselves at her. Talk about unwanted attention (you could analyze this as being an extremely exaggerated version of what women go through on a daily basis). The idea sounds contrite when I describe it, I know, but Cashore's writing makes it work with Fire. It makes Fire extremely sympathetic and likable when you see how she handles herself, and I think that's what carries this story. The plot itself is not amazing, your basic political turmoil that is resolved with the help of the main character, however the plot is much darker than in Graceling due to the horrors of war that Fire witnesses. This book is pegged as a "highly romantic" companion, but in truth, I don't see how it's "highly" romantic at all; the romance scenes were very low key, and I don't think the relationship was given the depth it should have had. I liked the romance in Graceling better, simply because it was witty and had more depth and development.

One area I wish had more development was about Cansrel, Fire's father. The flashback scenes with him were really intriguing, contrasting his fatherly love and devotion for Fire with his cruelty for everyone else. Aside from Fire, I think he was one of the better developed characters and I'm sad there wasn't more about him.

The one more thing that bugged me was Leck. Other than tying Fire to Graceling and being the creepy little bugger that he is, I didn't see a point in his showing up. It didn't really feel connected to the rest of the plot, just a hurried add-on to include him. There are a couple other things that bothered me, but I can't get into them because of spoilers, so read the book and tell me what you think.

So in the end after reading both books, I liked Graceling marginally better for those reasons above, but still really enjoyed reading Fire. The themes of everyone is a mix of good and evil, and parents don't define the children were really well-explored and made for an overall engrossing read. That saying, I am really looking forward to book 3, Bitterblue, and can't wait till it's released.

Thoughts on the cover:
I love this cover more than Graceling's because of it's colour scheme. The colour I believe is intended to be the shade of Fire's hair, and I love the blend of purple, red, pink, and orange. I also like Fire's face in the background, hidden so you don't see her eyes. This cover follows the theme set by Graceling with the weapon in the foreground and part of a face in the background.
Posted by Andrea at 6:41 PM