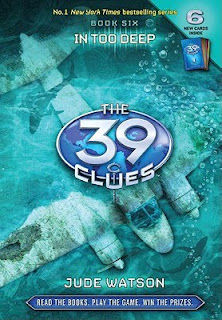 Summary:
From the publisher:
Are some secrets better left buried? As Amy and Dan track the next clue to a remote corner of the world, they make shocking discoveries about the source of the Cahill's power and the mystery of their parents' deaths. And as the threat of the mysterious Madrigals grows real, one of the clue-hunters makes the ultimate sacrifice. Amy and Dan have to decide how much they're willing to risk, and what they are fighting for. Can they avenge their parents or are they following their fatal path?

Review:
For those of you not familiar with this series, let me bring you up to speed. Amy Cahill and her 11-year-old brother Dan are shocked at the death of their grandmother, Grace Cahill. Not only do they find out their family is more important than they ever thought possible-every famous historical figure was a member of one of the four Cahill family branches-but Grace's will offers all current Cahills a chance to hunt for the 39 Clues, clues that are the key to the family's secret. Rather than take the $1 million cop-out, Dan and Amy travel the world in search of the 39 Clues, unraveling the secrets of their parents' deaths along the way.

This little series was developed by Scholastic as a money-maker, no big discovery there. 10 Books, trading cards, and an online gaming component are all used in the real-life hunt for the 39 Clues. Readers get one clue for every book, one clue for every online mission they complete, and clues are also found attached (digitally) to a specific trading card (after registering the cards online). This is a huge project for Scholastic and they brought all the top children's book authors onto the project: Rick Riordan, Gordon Korman, and Margaret Peterson Haddix among others (each author writes a different book). The different authors don't affect the plot for the most part, but the different writing styles do sometimes take some getting used to.

I like this series even though I'm way out of their targeted age category. They're adventure books that teach history and geography at the same time, and are pretty fun to boot. My nephew and I read these together (I buy them, he borrows them), and they're great for reluctant readers, especially boys.

I like this particular book because we find out more about Dan and Amy's parents and who was responsible for their deaths. Amy gets a lot of character development, which was nice to see, she was starting to seem very two dimensional.

Recommendation:
Modern day around-the-world adventures with psychotic relatives and supreme power at stake, what's not to like?

Thoughts on the cover:
These covers are getting much better as they go along. I love the turquoise colour scheme with the plane and the shark shadows done in that shiny plastic film.
Posted by Andrea at 8:14 PM