That's Not What Happened - Kody Keplinger 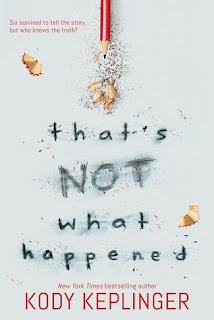 It's been three years since the Virgil County High School Massacre. Three years since my best friend, Sarah, was killed in a bathroom stall during the mass shooting. Everyone knows Sarah's story - that she died proclaiming her faith.

But it's not true.

I know be cause I was with her when she died. I didn't say anything then, and people got hurt because of it. Now Sarah's parents are publishing a book about her, so this might be my last chance to set the record straight...but I'm not the only survivor with a story to tell about what did - and didn't - happen that day.

Except Sarah's martyrdom is important to a lot of people, people who don't take kindly to what I'm trying to do. And the more I learn, the less certain I am about what's right. I don't know what will be worse: the guilt of staying silent or the consequences of speaking up.

From New York Times bestselling author Kody Keplinger comes an astonishing and thought-provoking exploration of the aftermath of tragedy, the power of narrative, and how we remember what we've lost.

Review:
I'm such a sucker for books like these, ones that talk about big issues that we don't often otherwise discuss in a way that invites something beyond the surface examination. School shootings are one of those issues.

Lee is one of six survivors of a mass shooting at her high school three years prior. Among the nine victims was her best friend, Sarah. Everybody believes that before she died, Sarah had a confrontation with the shooter about the cross necklace she was wearing, and is now thought of as a martyr. Lee tells us from the beginning that it isn't true, but she kept silent due to the harassment another survivor, Kellie Gaynor, received when she tried to tell the truth. As Lee is about to graduate, she learns that Sarah's parents have written a book about their daughter's story that is about to be released. Wanting to correct all the misconceptions that have emerged about the survivors as well as the victims, Lee asks the five to write letters telling their own stories about what really happened.

This novel is essentially about who controls the narrative in the aftermath of a tragedy. When people die, especially tragically, there's this aversion to talk about them as real people with flaws. No one likes to speak ill of the dead, after all. Lee is interested in the truth, even if it's not pretty, even if it means shattering the images people cling to in order to help them survive their grief. She doesn't shy away from admitting that even a victim people are mourning would've been classified as a jerk while living. But Lee grapples with her insistence on the truth, wondering who it really serves and if it does more harm than good.

I appreciated how the author made this book diverse in so many ways. Lee is asexual, and it plays a significant role in her character development. She's also the child of a single, teenaged mom who is very matter-of-fact about her deadbeat father and thankful to her mother for the sacrifices she's made. Denny is not only black (one of the only black kids in the school) but also blind. Eden is hispanic and a lesbian. The issue of religion is explored as well, from personal belief and lack of it, compared to organized religion.

I also like how the author included so many references to criticisms that we usually hear about in the aftermath of mass shootings: denying that the event ever occurred, calling the survivors "crisis actors," and pro-gun lobbyists confronting survivors. She was also very realistic about the effects of trauma: characters deal with anger, addiction, guilt, and depression that no one else really understands except for each other.

Recommendation:
This is a gripping, engrossing story that is hard to put down. This is something everybody should read, especially considering the frequency of mass shootings in recent years.

Thoughts on the cover:
The pencil, sharpener, and eraser marks reinforce the letter theme from the book; it's simple yet effective.
Posted by Andrea at 11:04 PM