How to Build a Girl - Caitlin Moran 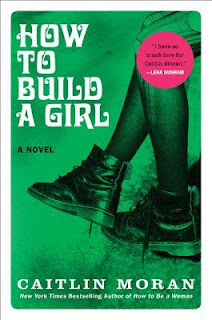 What do you do in your teenage years when you realize what your parents taught you wasn't enough? You must go out and find books and poetry and pop songs and bad heroes - and build yourself.

It's 1990. Johanna Morrigan, fourteen, has shamed herself so badly on local TV that she decides that there's no point in being Johanna anymore and reinvents herself as Dolly Wilde - fast-talking, hard-drinking gothic hero and full-time Lady Sex Adventurer. She will save her poverty-stricken Bohemian family by becoming a writer - like Jo in Little Women, or the Brontes - but without the dying-young bit.

By sixteen, she's smoking cigarettes, getting drunk, and working for a music paper. She's writing pornographic letters to rock stars, having all the kinds of sex with all the kinds of men, and eviscerating bands in reviews of 600 words or less.

But what happens when Johanna realizes she's build Dolly with a fatal flaw? Is a box full of records, a wall full of posters, and a head full of paperbacks enough to build a girl after all?

Imagine The Bell Jar - written by Rizzo from Grease. How to Build a Girl is a funny, poignant, and heartbreakingly evocative story of self-discovery and invention, as only Caitlin Moran could tell it.

Review:
After reading the sequel to this book, How to Be Famous, I figured I'd give the first instalment a try. How to Build a Girl is a hilarious read for sure, but I much more enjoyed How to Be Famous.

Fourteen-year-old Johanna lives in an overcrowded, low-income housing unit in Wolverhampton in the early 1990s. After she both humiliates herself on local television and accidentally gets her family kicked off their welfare benefits, she reinvents herself under the pseudonym of Dolly Wilde and gets a job as a music writer for the magazine D&ME. She dresses like a goth, smokes, does drugs, has lots of wild, crazy sex with men she barely knows, all while travelling around interviewing bands. Not only is she trying to help support her family, she's also trying to figure out who she is and what she wants to be, which makes this novel both appealing and a touch bit cliche. Granted, what saves this novel is that Johanna and her family are hilarious to read about. Johanna's not one of those annoying heroines who doesn't figure things out in the event of a royal screw-up, she smartens up and has some real growth.

Recommendation:
Not an overall fresh type of story, but funny as all hell, so it's worth the read.

Thoughts on the cover:
I like the continuity between this first instalment and the sequel's covers, very punk and grunge-y.
Posted by Andrea at 10:28 PM