How to Be Famous - Caitlin Moran 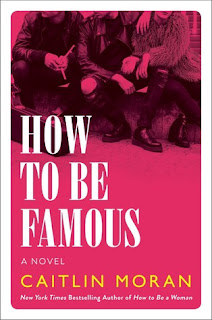 Johanna Morrigan (aka Dolly Wilde) has it all: she is nineteen, lives in her own flat in London, and writes for the coolest music magazine in Britain. Her star is rising, just not quickly enough for her liking.

Then, John Kite, Johanna's unrequited love, has an album go to number one. Suddenly John exists on another plane of reality: that of the famouses, a world of rabid fans and VIP access. Johanna lacks the traditional trappings of fame (famous parents, mind-scorching hotness, exotic sandals, etc.), so she does the only thing a self-respecting Lady Sex Adventurer can do. She starts a magazine column critiquing the lives and follies of the famouses around her. But as Johanna skyrockets to fame herself, she begins to realize that with celebrity comes sacrifice, and hers may mean giving up the one person she was determined to keep.

For anyone who has been a girl or known one, who has admired fame or judged it, How to Be Famous is a big-hearted, hilarious tale of fame and fortune - and all they entail.

Review:
I've been familiar with Moran's work for several years now, so when I was contacted by the publisher asking me if I wanted a copy of her newest book, I enthusiastically said yes. How to Be Famous is a sequel of sorts to her previous novel, How to Build a Girl, which you don't need to have read to enjoy this newest instalment - I haven't, but I can assure you, I will be rectifying that shortly.

How to Be Famous takes place in London circa 1994-1995 and follows the life of Johanna Morrigan, a nineteen-year-old living the life most teenagers would die for. She lives on her own, writes for a music magazine, and gets to interview famous people for a living (oh, 1994, when someone could actually live independently and have a job in the entertainment industry in their late teens). Johanna's life isn't perfect though. She is becoming increasingly aware of the sexism inherent in the male-dominated industry she works for; and her unrequited love, John Kite, rockets to stardom, leaving her further behind. She decides to win John Kite's heart the way she does best: by writing.

Moran does a wonderful job of capturing the spirit that was the mid-90s, and reminding us that even though we're looking at these events more than 20 years in the future, the problems Johanna faces are, not surprisingly, quite contemporary and relatable. There's a definite feminist vibe to the book (as with all of Moran's works), but everything is conveyed so well through Johanna's experiences to the point where you have such empathy for the character that you would literally punch Jerry Sharp in the face if he suddenly appeared in corporeal form before you.

Moran also writes with an amazing sense of humour. I began reading this book while proctoring exams, and it was a serious struggle to not burst out laughing while my poor students were trying to concentrate. So I thank the author for not only writing a wonderful book, but for rescuing me from the complete boredom that is proctoring exams. Not only is Johanna's narration deliciously funny, the character of Suzanne is absolutely hysterical. Heck, all of the characters are, but Suzanne is a particular treat for readers.

Moran's writing is not only funny, she has a gift for metaphor as well. I have several passages that are particular favourites, but this one is probably the least spoiler-y: "At this point, John's life was like a zoo on fire. Animals running everywhere. If I kissed him here, then, that kiss would just be just one more confused penguin, lost in a crowd of panicking zebras, and lions trying to eat eagles. I didn't want to be a sidelined penguin. I wanted to be the whole Ark."

Recommendation:
A deliciously funny romp amidst the backdrop of the British music scene of the mid-1990s with a feminist twist. Give this a go, you won't be disappointed.

Thoughts on the cover:
I love the punk/grunge look on the kids in the image, and the hot pink and yellow colour scheme is just immensely appealing.