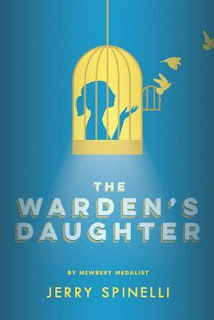 "For twelve years the warden had been enough. But now I was sick and tired of being motherless. I wanted one. And if I couldn't have my first-string mother, I'd bring one in off the bench."

Cammie lives with her father, the warden, in an apartment above the entrance to the county jail - so most of the mother figures she's got her eye on are inmates. There's a flamboyant shoplifter named Boo Boo, who dreams of hot fudge sundaes. And a sullen reformed arsonist named Eloda, who works as their housekeeper. Not ideal candidates maybe, but Cammie's nickname isn't Cannonball for nothing. She's a girl who decides what she wants and launches herself at it.

And this summer, Cannonball's fuse is lit and she is set to blow. Her best friend is discovering lipstick and Elvis. The guys she plays baseball with think she plays too rough. A child killer is brought to her prison, and demonstrators are gathering outside her windows. It's the kind if summer when a girl could really use a mom.

In this captivating novel by Jerry Spinelli, Cammie learns that you don't always get what you want. But what you need may be right around the corner.

Summary:
The premise sounded really promising, and after reading an excerpt online, I decided to give this a shot. I've read a few of the author's previous books years ago and was quite impressed, but I have to say this newest one was a bit of a let-down.

Cammie lives in an apartment above the Pennsylvania county prison with her father, the warden. Cammie's mother died in an accident when she was a baby, pushing her out of the way of a moving truck. Years later in 1959 when Cammie is turning thirteen and about to enter junior high school, she realizes she wants a mother-figure, to have that love she's been denied for so long. She hones in on the only female figures available in her environment: inmates. Eloda, a prison trustee (trusted inmate) who acts as their housekeeper, and Boo Boo, an obese black woman who adores Cammie.

The main issue with this book is that Cammie just isn't likeable in my opinion. She's twelve years old, and though I get that she's full of anger and love-starved (the whole theme of Cammie being in a prison of her own just like the inmates), kids know by that age that it doesn't give them the right to be a brat to everyone. The child was literally hell on wheels, which I'd expect from a younger kid, but not at nearly thirteen. If Cammie had been more developed as a character and had a chance to evoke more sympathy from readers, then perhaps I'd feel differently. The adults weren't much better to be honest. Not only does the warden give his daughter the keys to the prison yard so she can go socializing with the female inmates inside the fence (I find it hard to believe any professional in his position would do that), but both the warden and Eloda know that Cammie is angry and wanting attention and love from a female figure and acting out as a result...and in turn they deny her that outright love, watch from the sidelines as she engages in self-destructive behaviour, and then conveniently refuse to discipline her until she "gets it out of her system". I know people didn't believe in therapy in the 50s, but my god, Cammie would need a crap-ton of therapy after those brilliant parenting methods.

There's also the underlying issue of race in the novel, the issue being that it isn't addressed at all. It takes place mainly in the summer of 1959, so a key time period, and in addition to the black kids that Cammie plays with and the other black women in the prison, there's the issue of Boo Boo. She's the stereotype of the big, jolly black woman who has a soft spot for the little white girl. This wouldn't be as glaring of an issue if the characters were explored a bit more so they would be more than just a caricature, but in the absence of proper development, it just leaves me shaking my head. You do eventually get some development regarding Cammie's father and Eloda, but that doesn't happen until the very end of the novel (it's a miracle I even made it that far).

Recommendation:
Pales in comparison to Stargirl, Milkweed, or Manic Magee; so perhaps skip this novel and pick up one of the former instead.

Thoughts on the cover:
I do like the cover, the image of Cammie inside the cage freeing the birds is quite clever.
Posted by Andrea at 9:16 PM