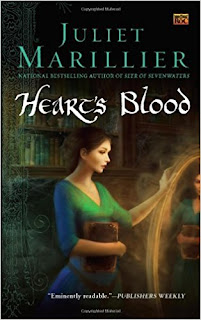 Whistling Tor is a place of secrets, a mysterious wooded hill housing the crumbling fortress of a chieftain whose name is spoken throughout the region in tones of revulsion and bitterness. A curse lies over Anluan's family and his people. The woods hold a perilous force whose every whisper threatens doom. And Anluan himself has been crippled by a childhood illness.

Then the young scribe Caitrin appears in Anluan's garden, admiring the rare plant known as heart's blood. Retained to sort through entangled family documents, Caitrin brings about unexpected changes in the household, casting a hopeful light against the despairing shadows.

But even as Caitrin brings solace to Anluan, and the promise of something more between them, he remains in thrall to the darkness surrounding Whistling Tor. To free Anluan's burdened soul, Caitrin must unravel the web or sorcery woven by his ancestors before it claims his life - and their love.

Review:
I'm on a Beauty and the Beast kick currently, so when I looked up a list of books inspired by the original tale and this one came up, I knew I had my next read.

In a world resembling medieval Ireland (cue the numerous Google searches on how to pronounce all the characters' names), Caitrin is a scribe who is escaping her abusive relatives after the death of her father. When she comes upon Whistling Tor and finds out the chieftain of the area is looking for the services of a scribe trained in Latin, Caitrin jumps at the chance for safety and security despite the stories in the settlement that the chieftain's family is cursed, and that supernatural beings haunt the hill. Anluan is the crippled leader of Whistling Tor, whose family curse originated with his great-grandfather Nechtan a hundred years prior. When Caitrin is hired to translate Nechtan's personal documents from Latin to Irish, she learns, both through the documents and experience, that the supernatural beings in the woods are actually an army of undead spirits: those who were once human but lingered in a purgatory-like existence after death due to some unfortunate error they committed and who are bound to whomever is the current chieftain at Whistling Tor. Anluan can command this army, collectively called the host, but it severely weakens him because he must constantly suppress the evil urges that sometimes overcome them. Detested by the folk of the settlement and angry over his handicap, Anluan is an awkward and self-loathing man that, despite his rough manners, Caitrin comes to admire due the loyalty he inspires from those in his household. After she is saved by Anluan and the host when her kinsman, Cillian, tries to bring her back home, Caitrin is determined to find some way to end the curse and set the host free. Throw in an invasion by the Normans and you've got an intriguing plot that is quite involving (at leastuntil the reader figures everything out).

What makes this retelling so superb is partly the writing style; the author does tend to be verbose, but I appreciated it since it added to the atmosphere. She is so skilled at not only crafting an engaging story that uniquely stands on its own despite borrowing elements from the Beauty and the Beast tale (enchanted castle, special flower, magic mirrors, Beauty's literacy and love of books), but by creating such realistic characters and a genuinely creepy environment that will send shivers down your back. Caitrin and Anluan are deeply flawed, realistic characters: Caitrin detests the frightened person she became under her abusive family, and Anluan believes he is less of a man and a leader not only because of his affected body, but because his control over the host does not allow him to leave the hill, leading to strained relationships with the folk in the settlement below. Caitrin is optimistically hopeful, which leads both her and Anluan to believe that with courage and determination they can improve their lot in life. I have to give the author credit for including the magic in the mirrors, it was a great way to experience a different point of view, plus it was just deliciously creepy and unsettling.

Recommendation:
An excellent read with a wonderful story, well-crafted romance, and lovely characters (I loved all the secondary characters as much as I loved the mains).

Thoughts on the cover:
It's kind of meh, but I can't quite figure out why.
Posted by Andrea at 10:02 PM