A Hope More Powerful Than the Sea: The Journey of Doaa Al Zamel - Melissa Fleming 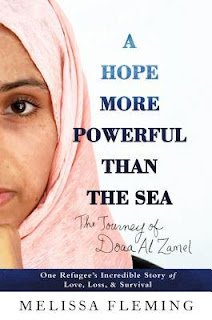 The stunning story of a young woman, an international crisis, and the triumph of the human spirit.

Adrift in a frigid sea, no land in sight - just debris from the ship's wreckage and floating corpses all around - nineteen-year-old Doaa Al Zamel floats with a small inflatable water ring around her waist and clutches two small children, barely toddlers, to her body. The children has been thrust into Doaa's arms by their drowning relatives, all refugees who boarded a dangerously overcrowded ship bound for Sweden and a new life. For days, Doaa floats, prays, and sings to the babies in her arms. She must stay alive for these children. She must not lose hope.

Doaa Al Zamel was once an average Syrian girl growing up in a crowded house in a bustling city near the Jordanian border. But in 2011, her life was upended. Inspired by the events of the Arab Spring, Syrians began to stand up against their own oppressive regime. When the army was sent to take control of of Doaa's hometown. strict curfews, power outages. water shortages, air raids, and violence disrupted everyday life. After Doaa's father's barbershop was destroyed and rumours of women being abducted spread through the community, her family decided to leave Syria for Egypt, where they hoped to stay in peace until they could return home. Only months after their arrival, the Egyptian government was overthrown and the environment turned hostile for refugees.

In the midst of this chaos, Doaa falls in love with a young opposition fighter who proposes marriage and convinces her to flee to the promise of safety and a better future in Europe. Terrified and unable to swim, Doaa and her young fiancee hand their life savings to smugglers and board a dilapidated fishing vessel with five hundred other refugees, including a hundred children. After four horrifying days at sea, another ship, filled with angry men shouting insults, rams into Doaa's boat, sinking it and leaving the passengers to drown.

That is where Doaa's struggle for survival really begins.

This emotionally charged, eye-opening true story represents the millions of unheard voices of refugees who risk everything in a desperate search for the promise of a safe future. Melissa Fleming sheds light on the most pressing humanitarian crisis of our time and paints a vivid, unforgettable portrait of the triumph of the human spirit.

Review:
There's been some hype surrounding this book, calling it "required reading." In my experience, if people throw that phrase around, there's usually a good reason, so I picked this up. It wasn't until after I'd started reading that I realized I'd encountered this story before; the author had given a TED Talk on the Syrian refugee crisis that I'd watched, and Doaa's story of surviving the aftermath of the sinking had been the focus.

The book opens with Doaa's childhood in Daraa, Syria, outlining Doaa's family dynamics and the events of her early years. It moves on to document the events of the Arab Spring-inspired protests in Daraa that Doaa participates in after the arrest and torture of a group of young boys in February 2011, and the stark decline of living conditions and the increase in violence in the months to follow. When Doaa's father Shokri fears for the safety of his daughters, the family seeks asylum in Egypt in late 2012. Though the family is initially welcomed in Egypt and they are soon able to have some semblance of the life they left behind, the Egyptian government under Morsi was overthrown in July 2013, which lead to hostile treatment of Syrian refugees almost overnight. Amidst all this, a man named Bassem, a fellow Syrian refugee in Egypt, falls in love with Doaa. She eventually accepts his proposal, and the two become engaged. After tensions lead to Doaa's younger siblings to be threatened at school, the young couple know they cannot remain in Egypt, so they make plans to leave for Europe in the only way available to them: illegal smuggling. After several failed attempts, Doaa and Bassem find themselves aboard a fishing vessel with five hundred other refugees in September 2014 headed for Italy, which later is intentionally struck by another boat and sinks. After days adrift at sea, Doaa is one of the only survivors to be rescued.

The author is wonderful at telling Doaa's story with a lovely narrative quality about it; I had to remind myself that I wasn't reading a work of fiction, that this was actually someone's real life. Doaa's story is quite sad, even more so because it is real for millions of people. It is for this reason that I echo the idea that Doaa's story should indeed be required reading, especially for anyone that is directly involved with refugees in fields such as politics, education, public policy, and social services.

Recommendation:
Though it is an incredibly sad account, this is one that everyone should truly read.

Thoughts on the cover:
I like how they did the split view of Doaa's face parallel to the title font.