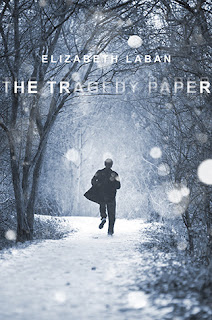 Time Macbeth is a seventeen-year-old albino and a recent transfer to the prestigious Irving School, where the motto is "Enter here to be and find a friend." Time does not expect to find a friend; all he really wants to do is escape his senior year unnoticed. Despite his efforts to blend into the background, he finds himself falling for the quintessential it-girl Vanessa Sheller, girlfriend of Irving's most popular boy. To Tim's surprise, Vanessa is into him too, but she can kiss her social status good-bye if anyone finds out. Tim and Vanessa begin a clandestine relationship while looming over them is the Tragedy Paper, Irving's version of a senior-year thesis, assigned by the school's least forgiving teacher, Mr.Simon.

Elizabeth LaBan's stunning novel unfolds from two alternating viewpoints: Tim, the love-struck new kid, and Duncan, a current senior who uncovers the truth behind Tim and Vanessa's story and will consequently produce the greatest Tragedy Paper in Irving's history.

Duncan is a senior at the Irving School, a private boarding school in New York state. When Duncan arrives on the first day of school to find his room and his treasure, a present the previous year's graduate leaves for the new senior that occupies their dorm room, he is disappointed not only that he has received the worst room on the floor, but also that his "treasure" is a bunch of CD's. Upon closer examination, the CD's are recordings by Tim Macbeth, the room's prior occupant, who was involved in some unfortunate events that occurred last year that the reader isn't completely informed of until the end of the novel. Duncan begins to play them, getting caught up in Tim's story of himself and Vanessa, a classmate that he finds himself falling for.

The chapters alternate viewpoints between Duncan and Tim. The dual narration is well-done, the voices are clearly distinct and I never got them confused. Tim's story was engaging. Even though I never cared much for Vanessa as a character, I read on purely because I wanted to know what happened to Tim. I also love how the author made this novel very much like a modern-day equivalent to a classic tragedy, from the character names from tragic literature (Tim Macbeth, Duncan, Daisy) to the presence of tragic flaws, and the adherence to the proper structure of tragedy. Duncan is afraid his senior year will be tragic like Tim's and Vanessa's, so it is interesting to see the dichotomy between Tim and Vanessa's actions and Duncan and Daisy's.

Recommendation:
Now go forth and spread beauty and light by reading this book, especially if you're a literature enthusiast.

Thoughts on the cover:
I love the image of Tim (I'm assuming Tim) running in the snow with his back to the reader. The colour scheme of blue, silver, and grey is very aesthetically pleasing as well.
Posted by Andrea at 4:15 PM