The Keeper of the Mist - Rachel Neumeier 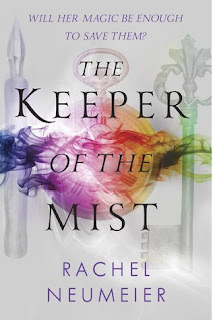 Keri has spent much of her life trying to go unnoticed, and as a young woman running her mother's bakery, the death of the Lord of Nimmira should have little impact on her. But the Lord of Nimmira was Keri's estranged father, and ancient magic has unexpectedly decreed that she will take his place as the new Lady.

The powerful position has never been so dangerous: the magical mists that hide Nimmira from its vicious, land-hungry neighbours have failed. Now Keri's people are visible to strangers for the first time in generations. Meanwhile, half brothers with their own eyes on the crown make life within the House just as dangerous as the world outside.

Keri has three sources of guidance: her mysterious Timekeeper, a wise and intimidating man; her clever Bookkeeper and best friend since childhood, Tassel; and her steadfast Doorkeeper, Tassel's stoic but noble cousin. Thrust into the spotlight after a lifetime of avoiding it, Keri must find the will to lead - or lose everything.

Review:
It's been a while since I've read a good high fantasy, so I figured this would be a good pick.

Kerianna is the youngest (and illegitimate) child of the Lord of Nimmira. When the Lord dies and the Mist must choose a successor, Keri never thinks it will be her, everyone in town wants her older half brothers Brann or Domeric to inherit, since youngest brother Lucas is not an ideal ruler. So when Lord Dorric's Timekeeper, Bookkeeper, and Doorkeeper come to her bakery to appoint her as the new Lady, Keri has a lot to take in. She doesn't have much time to adjust to her new role though, because the Mist around Nimmira is weakening, exposing their tiny country and making them vulnerable to invasion. Keri must figure out a way to repair the Mist and keep the lords of the neighbouring countries at bay, all while trying to navigate her new role as Lady and trying to gauge how trustworthy her three brothers are.

The world-building was interesting here, though I wish the magic system was explained more. Keri just automatically comes into her magic without any training, so that was slightly unrealistic in my opinion. The world-building and characterization could've been developed a bit more, but I felt like those elements were sacrificed in order to keep moving along with the plot.

Keri fell a little flat in terms of characterization, she was your average fantasy heroine who is thrust into a position of power who feels conflicted yet persists, there wasn't much to distinguish her. I liked Tassel, but Cort fell into that same trap of the stoic male who's really rather devoted. I adored Lucas though, he's more of an original character and really made me laugh.

Recommendation:
Interesting premise that is worth checking out.

Thoughts on the cover:
I like the multi-coloured mist against the silver background, very eye-catching.
Posted by Andrea at 9:51 PM