A Year Without Mom - Dasha Tolstikova 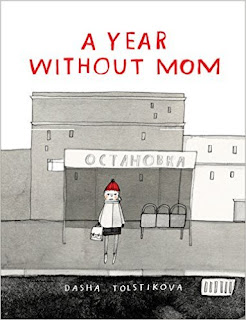 A Year Without Mom follows twelve-year-old Dasha through a year full of turmoil after her mother leaves for America.

It is the early 1990s in Moscow, and political change is in the air. But Dasha is more worried about her own challenges as she negotiates family, friendships, and school without her mother. Just as she begins to find her own feet, she learns that she is to join her mother in America - a place that seems impossibly far from everything and everyone she loves.

This gorgeous and subtly illustrated graphic novel signals the emergence of Dasha Tolstikova as a major new talent.

Review:
I picked this up because I love graphic novel accounts of kids living in other countries, especially during important times in history, so I figured this fit the bill.

Dasha lives in Moscow in the Soviet Union of the 90s with her mother and grandparents, while her father lives in Los Angeles. When her mother is accepted to study at a university in Chicago and leaves for a year, Dasha feels lonely and unsure of how she will cope with everything with her mom gone. She proves herself resilient though, navigating crushes, friends, and school more or less on her own. When her mother comes for a visit, she tells Dasha that she is coming with her to America for the next year before they both return to Russia. Dasha realizes she has grown and changed in the year her mother was gone, and whereas before she would've gone with her mother in a heartbeat, now she is reluctant to leave.

I assumed before picking this up that because the story takes place in Russia around the time communism fell that the political climate would have more of a focus in the story, but aside from some differences in the school system and some vocabulary, I honestly forgot I was reading a story that even took place in Russia. Dasha's struggles are quite universal, and she worries about the same stuff every other twelve year old does, which makes this a good pick for the middle grades to show that we as humans are really more alike than we are different no matter where we live.

Recommendation:
Very nice story with universal struggles all kids can relate to, with an interesting art style as well (normally not my cup of tea but I actually liked it).

Thoughts on the cover:
You can get a good feel for the art style here, and the image is strangely representative of the atmosphere of the book (Dasha alone being slightly apprehensive about it all).