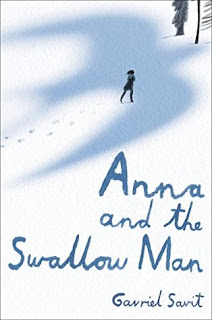 Krakow, 1939. A million marching soldiers and a thousand barking dogs. This is no place to grow up. Anna Lania is just seven years old when the Germans take her father, a linguistics professor, during their purge of intellectuals in Poland. She's alone.

And then Anna meets the Swallow Man. He is a mystery, strange and tall, a skilled deceiver with more than a little magic up his sleeve. And when the soldiers in the streets look at him, they see what he wants them to see.

The Swallow Man is not Anna's father - she knows that very well - but she also knows that, like her father, he's in danger of being taken, and like her father, he has a gift for languages: Polish, Russian, German, Yiddish, even Bird. When he summons a bright, beautiful swallow down to his hand to stop her from crying, Anna is entranced. She follows him into the wilderness.

Over the course of their travels together, Anna and the Swallow Man will dodge bombs, tame soldiers, and even, despite their better judgement, make a friend. But in a world gone mad, everything can prove dangerous. Even the Swallow Man.

Review:
Wow. I'm truly at a loss for words in regards to this book. When I read the summary before the release date in January I knew I had to get my hands on this book. Let's just say the hype is very well deserved and I'm simply enchanted.

Anna lives in Poland in 1939 with her father, who is a linguistics professor at the university. By the time she is seven years old at the start of the book, she is proficient in several languages thanks to his upbringing. When her father is summoned to work one day and leaves her with a friend, neither of them consider that this would be the last time they would see each other. When the friend abandons Anna to her own devices, she soon meets the Swallow Man, a mysterious stranger who is a master of survival and deception, and like Anna's father, speaks multiple languages. Anna instinctively trusts him and decides to go with him:

"There was no question that the tall stranger was not a reassuring presence. There was a menace to him, a quiet intensity that that was in no way akin to the sot of quality that people cultivate in order to attract the affections of children. All the same, though, there was something in him - perhaps the part that had spoken so easily to the swallow - that fascinated her. He was strange, to be sure, this man, but his was a pungent, familiar sort of strangeness. Perhaps Anna and her father had not had a language of their own - or perhaps their language had been every language. Anna felt irresistibly that in this tall stranger she had found another of their rare tribe - a man of many tongues." (21-22)

And with that, Anna follows the Swallow Man out of Krakow and into the Polish countryside. They travel constantly over the course of several years, managing to avoid detection. The Swallow Man is at the same time someone to be feared and admired: he does not mince words with Anna over the dire circumstances they've found themselves in, but perhaps due to paternal instinct he makes things almost like a game for her, telling her they are travelling to find a rare bird, and comparing German and Russian soldiers to wolves and bears they must avoid in order to survive.

The writing in this book is superb. The author writes not only with intelligence, but with a sense of whimsy and magical realism. Every word is carefully crafted and chosen for its impact on the reader, take these two sections:

" 'A river goes along wherever the riverbank does. It never has to ask which way, but only flows along...What I mean, then, is I'll be the riverbank and you be the river. In all things. Can you promise me that?...And someday...when you are much, much older, you must ask me what erosion is.' " (43)

"There seemed to be no words worthy of speech, there and then, in any of the myriad languages between Anna and the Swallow Man. A word is a tiny moment of time devoted to the conjuring aloud of some small corner of what is - 'apple,' say, or 'running'; even 'fully' or 'mystery.' But there was no significance to anything that was, in that moment, only what was not." (175)

The characters themselves are well-crafted. Anna is a child throughout the book, and we're never made to forget it despite her being intelligent and precocious. The Swallow Man is perhaps one of the most fascinating characters I've ever seen. He is both frightening and reassuring, we constantly question his motivation, but like Anna, we know he is good, his goodness just doesn't manifest in ways we expect.

The war of course is a back-drop to the novel. Since the characters purposefully travel around the battles and pop into settled areas rarely, it's a subtle element that proverbially smacks us in the face now and then, like when Anna and the Swallow Man come across a mass grave for example.

The little details and hints, and the ending, still have me puzzling over the book even after finishing it. I can't muse too much here for fear of spoilers, but needless to say I need to find other people who have read this so I can have a book-nerd conversation with them about it.

Recommendation:
You need to read this book. The writing is outstanding, the story is simple yet complex, and the characters are enthralling. This is a story you won't soon forget.

Thoughts on the cover:
Simple yet very fitting.
Posted by Andrea at 1:56 PM