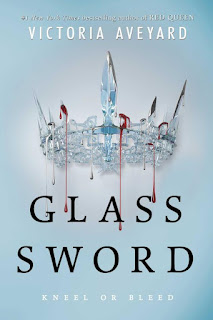 If there's one thing Mare Barrow knows, it's that she's different. Mare Barrow's blood is red - the colour of common folk - but her Silver ability, the power to control lightening, has turned her into a weapon that the royal court tries to control.

The crown calls her an impossibility, a fake, but as she makes her escape from Maven, the prince - the friend - who betrayed her, Mare uncovers something startling: She is not the only one of her kind.

Pursued by Maven, now a vindictive king, Mare sets out to find ad recruit other Red-and-Silver fighters to join in the struggle against her oppressors.

But Mare finds herself on a deadly path, at risk of becoming exactly the kind of monster she is trying to defeat.

Will she shatter under the weight of of the lives that are the cost of rebellion? Or have treachery and betrayal hardened her forever?

The electrifying next instalment in the Red Queen series escalates the struggle between the growing rebel army and the blood-segregated world they've always known - and pits Mare against the darkness that has grown in her soul.

Review:
I read Red Queen last year and quite enjoyed it, so I was eager to pick up the new instalment and dive back into the story. Glass Sword was okay, but unfortunately the first half of the book suffered from what I call bridge-book issues (where a second book just doesn't cut it like a first or final book), and it didn't really get exciting until past the halfway mark.

The book details Mare's involvement with the Scarlet Guard and their journey to locate the Reds with Silver abilities (newbloods) that Julian outlined in his list that he gave her. The constant traveling and trying and failing to secure the newbloods just felt like overkill, and Mare being a tad overdramatic about her suffering sucked any enjoyment out of it, I wanted to slap her upside the head for a majority of the the time. Things did pick up eventually, and my favourite character did make a repeat appearance. The ending is amazing and unexpected, but it felt like slogging through a whole lot of book just for a small redeeming section.

Recommendation:
Bridge-book alert, I enjoyed Red Queen but this didn't quite cut it for me. Granted, I will probably pick up the next instalment to see what transpires from the ending here.

Thoughts on the cover:
These covers are incredibly pretty, and I like the continuity for the whole series of books and side stories.