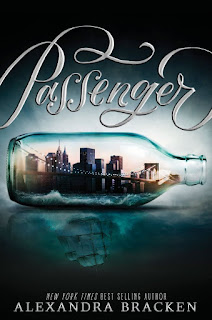 passage, n.
i. A brief section of music composed of a series of notes and flourishes.
ii. A journey by water; a voyage.
iii. The transition from one place to another, across space and time.

In one devastating night, violin prodigy Etta Spencer loses everything she knows and loves. Thrust into an unfamiliar world by a stranger with a dangerous agenda, Etta is certain of only one thing: she has traveled not just miles but years from home. And she's inherited a legacy she knows nothing about from a family whose existence she's never heard of. Until now.

Nicholas Carter is content with his life at sea, free from the Ironwoods - a powerful family in the colonies - and the servitude he's known at their hands. But with the arrival of an unusual passenger on his ship comes the insistent pull of the past that he can't escape and the family that won't let him go so easily. Now the Ironwoods are searching for a stolen object of untold value, one they believe only Etta, Nicholas' passenger, can find. In order to protect her, he must ensure she brings it back to them - whether she wants to or not.

Together, Etta and Nicholas embark on a perilous journey across centuries and continents, piecing together clues left behind by the traveler who will do anything to keep the object out of the Ironwoods' grasp. But as they get closer to the truth of their search, and the deadly game the Ironwoods are playing, treacherous forces threaten to separate Etta not only from Nicholas but from her path home...forever.

Review:
I've read a few things from this author, from her debut book, Brightly Woven, which I loved to pieces, to her more recent series, The Darkest Minds, which was good but didn't endear me to it like her debut did. Passenger took a little while to get going, but when it did it blew me away.

Passenger's world building takes a while to develop, mostly because Etta is kept in the dark by her mother and so readers discover things at the same incredibly agonizing pace that Etta does. I had to push myself through the first 70 pages or so until things really picked up, and from then on the novel moves along at a quick pace and doesn't stop.

The characters are quite refreshing. Etta (Henrietta) is a violinist and Nicholas is a mariner, so I appreciated the music and sailing references the author worked into the book. Etta's feisty and independent, which compared to the times she travels to, it makes her stand out. Nicholas is a character I really appreciated: a biracial young man from the 18th century who works at sea to escape not only the racial tensions of his time, but also the Ironwoods who have controlled him in the past. I actually enjoyed Nicholas more than Etta; its rare that I enjoy the male protagonist more than the female, but Nicholas was just too appealing not to love (especially his 18th century chivalry). The romance between Nicholas and Etta was well done: the attraction was instant but the love developed gradually, both very respectful of each other while still maintaining their own sense of self, plus they are a biracial couple, something we sadly don't see very often in modern YA literature.

Passenger is the first book in a series (not sure how many as of yet), so don't get turned off by the cliffhanger ending because there is at least one more book coming. I'll definitely be picking up the next installment because Passenger's world has me hooked.

Recommendation:
Excellent premise and world building with admirable characters, though it does start off slow.

Thoughts on the cover:
Beautiful. I love the ship in a bottle idea, except the ship is reflected on the bottom (Nicholas' world) with modern day New York most visible at the top (Etta's world). The colour scheme is appealing overall as well.
Posted by Andrea at 2:18 PM