The Queen of the Tearling - Erika Johansen 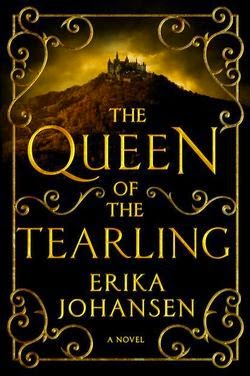 Summary:
From the inside  cover:

An untested young princess must claim her throne, learn to become a queen, and combat a malevolent sorceress in an epic battle between light and darkness in this spectacular debut - the first novel in a trilogy.

Young Kelsea Raleigh was raised in hiding after the death of her mother, Queen Elyssa, far from the intrigues of the royal Keep and in the care of two devoted servants who pledged their lives to protect her. Growing up in a cottage deep in the woods, Kelsea knows little of her kingdom's haunted past...or that its fate will soon rest in her hands.

Long ago, Kelsea's forefathers sailed away from a decaying world to establish a new land free of modern technology. Three hundred years later, this feudal society had divided into three fearful nations who pay duties to a fourth: the powerful Mortmesne, ruled by the cunning Red Queen. Now, on Kelsea's nineteenth birthday, the tattered remnants of the Queen's Guard - loyal soldiers who protect the throne - have appeared to escort the princess on a perilous journey to the capital to ascend to her rightful place as the new Queen of the Tearling.

Though born of royal blood and in possession of the Tear sapphire, a jewel of immense power and magic, Kelsea has never felt more uncertain of her ability to rule. But the shocking evil she discovers in the heart of her realm will precipitate an act of immense daring, throwing the entire kingdom into turmoil - and unleashing the Red Queen's vengeance. A cabal of enemies with an array of deadly weapons, from crimson-caped assassins to the darkest blood magic, plots to destroy her. but Kelsea is growing in strength, her steely resolve earning her loyal allies, including the Queen's Guard, led by the enigmatic Lazarus, and the intriguing outlaw known simply as "the Fetch."

Kelsea's quest to save her kingdom and meet her destiny has only just begun. Riddled with mysteries, betrayals, and treacherous battles, Kelsea's journey is a trial by fire that will either forge a legend...or destroy her.

Review:
This book received oh so much hype, mainly due to its kick-butt heroine, so I knew I had to check it out. There were a few things that bugged me, but overall the hype is well-deserved.

First off, I liked how the world-building was set up as a fantasy, but not quite. The founders of the Tear and the surrounding lands (collectively called New Europe) originally fled from our modern-day North America and Europe, escaping decimated lands. So this book is actually set in the future and meets a lot of the criteria of a dystopian novel as well as a fantasy. William Tear felt his society's downfall was due to technology, so he founded the Tearling without the use of technology. Unfortunately, that also meant the Tearling had a lack of trained medical professionals as well, and combined with the influence of God's Church (a thinly veiled reference to Catholicism) and the lack of mandatory education, the Tearling is an overly poor, illiterate, feudal society.

This is the world Kelsea finds herself inheriting. After being sent away as an infant and raised by Barty and Carlin Glynn in a remote cabin in the woods, Kelsea receives a balanced education and develops into a resourceful young woman quite the opposite of her late mother. She finds the Queen's Guards waiting to escort her back to the Keep on her nineteenth birthday, but most suspect she will be assassinated before she even gets there.

Kelsea is a great female protagonist: she's not drop-dead pretty or super skinny, she can wield a knife to defend herself (granted her weaponry skills can use some improvement), she sticks to her own moral code, she's a book nerd with an awesome library, and she's quite witty. The only thing that doesn't quite make sense to me is how amazingly well she adjusts to society after being exposed to only two people growing up. I know she read a lot and Barty and Carlin had different personalities, but there's no way she could seamlessly integrate the way she does, there would have to be bumps along the way...

I do appreciate the allusions to the consequences of a society that values religion above education.  God's Church in the Tearling is a powerful influence that forbids contraceptives and doesn't say anything against the degradation of the education system or the immorality of the monthly caravans of Tear citizens sold as slaves to Mortmesne. Printing presses aren't used, so all books from the pre-Crossing era are rare. One of the most touching scenes for me was when Kelsea retrieves all Carlin's books from the cabin and fills her mother's empty bookshelves in the Keep. The children of Kelsea's female workers and her guards are all sitting around reading, and Kelsea gets the inspiration to create libraries again. And props to the author for references to Tolkien and Harry Potter in Kelsea's library.

Recommendation:
Excellent start to what seems like a great new series. Will definitely be picking up the subsequent books.

Thoughts on the cover:
I like the black and gold colour scheme, other than that it looks like your typical fantasy cover with your token castle.