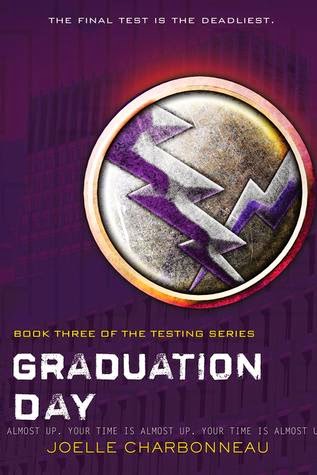 With the United Commonwealth teetering on the brink of all-out civil war, this is the moment to lead that the gifted student and Testing survivor Cia Vale has trained for.

Having discovered the brutal truth behind The Testing, she has vowed to end it once and for all. As Cia plunges through layers of deception and danger, she must risk the lives of those she loves most and gamble on the loyalty of her lethal classmates.

The stakes are higher than ever - lives of promise cut short or fulfilled; a future ruled by fear or hope - in this electrifying conclusion to Joelle Charbonneau's epic Testing trilogy.

Review:
After reading The Testing and Independent Study, this quickly became my new favourite trilogy. Now that it's ended, I can safely say I was impressed by every book in the series, including this final one, even though the tone and pacing of this last book is very different from the first two.

Graduation Day picks up where the last book left off, Cia knows that the leader of the rebels who are trying to stop the Testing isn't really interested in stopping the Testing, and that the whole plot is a rouse to eliminate the opposition. So when Cia uses her connection as the President's intern to relay this news, the President charges her with a new task: to kill those who are responsible for the Testing in order to make sure she will succeed where the rebels will not. So Cia goes about formulating her plan, angsting over whether she can actually kill someone (but realizing it needs to be done or else the Testing will never end), recruiting classmates to help her, testing the loyalty of those classmates, and executing the plan, all while avoiding detection by the university officials.

The Testing and Independent Study were very action-packed books, there's the anguish of the demanding school tests and homework, and the back-breaking physical tests. Graduation Day is very much a slower paced book because it focuses on a psychological battle of wills. The ending is very much a mind-screw where Cia questions everything she had been made to believe and her father's words of trusting no one ring true.

The only thing I have issues with is the notion the book puts forth that leaders need to be prepared to make 'difficult decisions' (aka kill people) to do what ultimately needs to be done. Spoiler alerts ahead!! Although Cia only kills in self-defense and another character does the outright killing for her, the only way to stop the Testing was for Cia to kill someone (to prove they don't need the Testing to see if a candidate can make difficult decisions since Cia was recommended to fail but they passed her as a test). I'm all for presenting the idea that leaders need to make 'difficult decisions' such as putting the needs of the many over the needs of the few when it comes down to it, but to go so far as to advocate killing first over say, exposing the offending party to the public and letting the legal system have a crack at punishment, or at least trying other methods before just saying "yup, so and so needs to die", just doesn't sit right with me. So if what I wrote above doesn't sit right with your moral code either, you might want to think twice about recommending this particular instalment.

Recommendation:
Good ending to the series, but I had issues with some of the moral points raised in the book.

Thoughts on the cover:
Keeping with the theme of the previous two book covers, this one uses Raffe's symbol of the double lightning bolts with a purple colour scheme.
Posted by Andrea at 11:05 AM