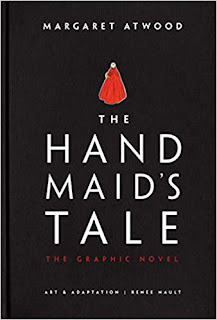 Offred is a handmaid in the Republic of Gilead, where women are prohibited from holding jobs, reading, and forming friendships. She serves in the household of the Commander and his wife, and under the new social order she has only one purpose: once a month, she must lie on her back and pray that the Commander makes her pregnant, because in an age of declining births, Offred and the other Handmaids are valued only if they are fertile. But Offred remembers the years before Gilead, when she was an independent woman who had a job, a family, and a name of her own. Now, her memories and her will to survive are acts of rebellion.

Provocative, startling, prophetic, The Handmaid's Tale has long been a global phenomenon. With this stunning graphic novel adaptation of Margaret Atwood's modern classic, beautifully realized by artist Renee Nault, the terrifying world of Gilead has been brought to vivd life like never before.

Review:
I have a confession to make. Although I am both Canadian and an English teacher, I am not fond of Margaret Atwood's writing. I love the stories she comes up with, just not the way in which she conveys them (similar to how I feel about Tolkien). So although I have read The Handmaid's Tale and  love it for the story itself, the experience was like pulling teeth. So when I discovered a graphic novel adaptation was being released, I wanted to see if this could potentially make the written form of the story more palatable, and at least in my case, it did.

The art style of the graphic novel is very aesthetically pleasing, especially the bright, bold colours. I love how the artist depicted the dress styles of Gilead being very billowy, very much like how little girls are dressed, they hide the body rather than accentuate it, which makes sense given the strict rules governing modesty in Gilead. 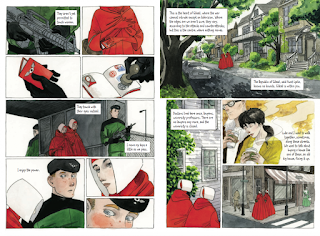 Thoughts on the cover:
Very simple but quite effective, the only thing aside from the title font that draws your attention is the tiny embossed Offred in the signature red dress.