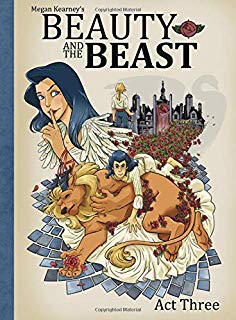 It hurts to love a wild thing...

Released from her contract, Beauty returns home but cannot escape the memory of The Beast's embrace. Meanwhile, as he prepares to make one final sacrifice, The Beast finds himself drawn to the truth at the heart of the labyrinth...

At what cost came Beauty's freedom? Can love save a life? In this final volume, both Beauty and The Beast must face the truths they've kept from themselves and learn that sometimes you have to fight for the one you love.

Review:
It's bittersweet when a series you love comes to an end. You're happy to get a resolution after years of reading and waiting for instalments, but at the same time you realize that there will be no more of this thing you truly enjoyed. I discovered this locally-created series one night while scouring the internet several years ago and fell oh so hard for it. I still remember the sleep-deprivation the day after staying up until the wee hours catching up on years worth of comics in one sitting (it was worth it!). For those who missed my prior reviews, here they are for Act One and Act Two. And below is the lovely series in its entirety, which has a devoted spot on my bedside table. 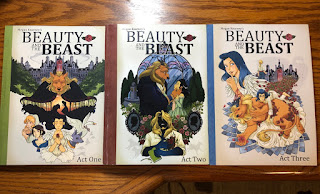 For those who haven't read Acts One and Two, this author's version of Beauty and the Beast is by far my favourite adaptation of the tale. Ever. And I've read practically all of them, so that's saying a lot.

The author incorporates the original aspects of the story and expands upon them, so the story is as much uniquely hers as it is the classic tale. The artwork here is beautiful and so incredibly expressive, I especially love how the author draws Beast's expressions. The characterization really shines as well. The author flushes out all the characters so that you're emotionally invested in everyone (I personally had a soft spot for Beauty's sister Temperance). The plot is much richer here, with flashbacks from Beast and Beauty's pasts that play into the larger story. There's also a lot of detail for bookworms that's easily missed if you only read the dialogue and ignore the backgrounds. There's so much in terms of mythological imagery and symbolism, the language of flowers, as well as literary references, you could spend hours cross-referencing everything. The author truly did her homework here.

Moving away from the work as a whole and focusing solely on Act Three, this is the emotional equivalent of being struck by a 2x4. Beauty and Beast are separated from each other, and both are miserable. Beauty has to figure out exactly what she wants and learn to communicate this to her family (and later Beast) without running away. Beast is confronted with his past actions and has to learn to embrace the person he once was and learn from those experiences rather than simply wish that part of him didn't exist. The themes present here really hit home, which is why I think adult readers would get more out of this than younger readers. Swan Mom (nickname for Beauty's mom) has a particularly poignant quote that I wish I had learned in my younger years, it would have saved me a lot of heartache, "No matter how much one might want to save someone from themselves, it can't be done. We can only love them and stand by as we wait for them to decide whether they save themselves or not. Otherwise, you will both be dragged down." 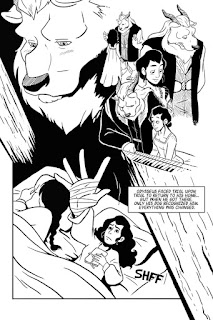 Recommendation:
As with the other volumes, and in fact the series as a whole, just go read this. It has beautiful, fluid artwork and superb storytelling that actually holds up to our modern criticisms of the original tale, wonderful characters, and a depth of detail that I haven't seen in many other graphic novels. All three volumes can be purchased here. You can read the entirety of the comic online here.

Thoughts on the cover:
Again, I love when covers have continuity from one instalment to the next. This last volume is in blue (with a plethora of blue accents in the illustration), which pairs well with the red of Act Two and the green of Act One.
Posted by Andrea at 7:56 PM