The Shape of Water - Guillermo Del Toro and Daniel Kraus 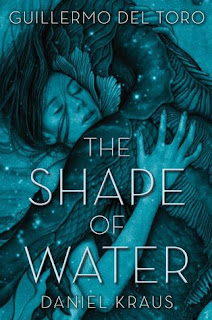 It is 1962, and Elisa Esposito - mute her whole life, orphaned as a child - is struggling with her humdrum existence as a janitor working the graveyard shift at Baltimore's Occam Aerospace Research Centre . Were it not for Zelda, a protective coworker, and Giles, her loving neighbour, she doesn't know how she'd make it through the day.

Then, one fateful night, she sees something she was never meant to see, the Center's most sensitive asset ever: an amphibious man, captured in the Amazon, to be studied for Cold War advancements. The creature is terrifying but also magnificent, capable of language and of understanding emotions...and Elisa can't keep away. Using sign language, the two learn to communicate. Soon, affection turns into love, and the creature becomes Elisa's sole reason to live.

But outside forces are pressing in, Richard Strickland, the obsessed soldier who tracked the asset through the Amazon, wants nothing more than to dissect it before the Russians get a chance to steal it. Elisa has no choice but to risk everything to save her beloved. With the help of Zelda and Giles, Elisa hatches a plan to break out the creature. But Strickland is onto them. And the Russians are, indeed, coming.

Developed from the ground up as a bold two-tiered release - one story interpreted by two artists in the independent mediums of literature and film - The Shape of Water is unlike anything you've ever read or seen.

Review:
I adored the film when it came out at the end of last year, so picking up the novelization of it was a given.

If you've already seen the film, there's not much else to tell you since you already know the story. What I like best about the novel is that it's written in third person omniscient, we get to see into the minds of practically every single character, including the creature, Strickland, and even Strickland's wife. These viewpoints in particular were the most intriguing to me, I love hearing from the antagonist's point of view, and having his wife's story included was a nice bonus, she's surprisingly a pretty fleshed out character. There were only a couple segments written from the creature's point of view, but they were stunningly profound despite their simplicity in language.

Recommendation:
If you enjoyed the film you have to read the novel, it complements the film nicely and gives a greater breadth of dimension to the story and characters.

Thoughts on the cover:
I think the cover image was one version of the movie poster, if I remember correctly. It's a nice image, so it works.
Posted by Andrea at 10:22 PM