Girls on the Edge - Leonard Sax 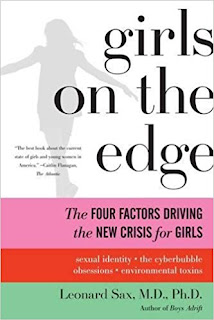 Many girls today are engaging in self-destructive behaviour: cutting themselves; obsessing over their appearance, grades, sports, and social networking sites; acting sexy when they don't feel sexyMany have a brittle sense of self. A growing proportion of teen and tween girls are confused about their sexual identity, and there is new evidence that environmental toxins are accelerating their physical maturity faster than their emotional maturity. Many girls today may look confident and strong on the outside, but inside, they're fragile.

In Girls on the Edge, psychologist and physician Leonard Sax provides the tools we need to help girls become independent and confident women. He offers parents practical tips on everything from helping their daughter choose a sports team to deciding limits on social networking sites. Sax also shows how and why girls are more likely to reach their potential if they are involved in communities of women, communities that bridge the generations.

Essential and inspiring, Girls on the Edge points the way to a new future for today's girls and young women.

Review:
So after reviewing this author's books on parenting and boys, I've now come to his book on girls, which is fitting and concerns me the most since I'm the parent of daughters.

Similar to the trend with males, the author illustrates that girls are going through a crisis of their own, it's just different from the boys: whereas boys tend to act out their problems, girls tend to turn inward onto themselves. This means girls who don't have a developed sense of self will focus on things that are superficial enough that when they erode and crumble (because they always do), a girl's sense of self crumbles as well, because she chose to focus on ranking and grades, beauty, or intense athleticism. The author identifies four factors driving this crisis in girls: sexual identity (or sexual objectification), the cyberbubble (internet culture), obsessions, and environmental toxins (specifically endocrine disruptors).

I honestly wish this book had been around when I was a teenager, I think it would've saved me some heartache at the very least to be able to put into words all the things I was feeling at the time. I can identify with practically everything the author has compiled here, except for the cyberbubble part since internet culture was in its early days when I was a teenager and I don't believe it had as huge of a formative part of my upbringing as it does for kids nowadays.

The chapter on sexuality is one that echoes a lot of sentiments in other parenting books I've read (specifically on parenting girls). When I found out I was going to have a daughter, one of the first things that hit me was that, based on recent research at the time, my future child would have a fifty percent chance of being molested/sexually assaulted at some point in her life....boys don't come with stats like that. Granted boys have their own toxic gender issues to deal with, and our culture isn't great for boys either, but boys don't have to deal specifically with the sexual objectification and fear of sexual violence the way that girls and women do, so I'm glad there was a chapter devoted to this. Since girls are going through puberty earlier than in the past, girls physically mature long before they mature emotionally, so they're dealing with their "place" in society as this image of sexual gratification before they can even comprehend what this means...and it messes up the psyches of so many girls, I know it did for me.

The chapter on obsessions was really eye-opening for me. I teach so many girls who fall into these various categories: the smart one, the athletic one, the girl who drinks, the girl who obsesses over her appearance (to the point of having an eating disorder), and the girl who cuts herself. The author describes these as "anorexia of the soul," and I can't think of a more poignant word phrase for it. In the absence of a developed sense of self, girls turn to these things to the point of obsession, so the idea is to help girls discover their sense of who they really are by being part of a community of supportive women. The author is also in favour of single-sex classrooms for both girls and boys, which, although backed by research, isn't always a viable option depending on what area you live in.

Recommendation:
Like the author's other books I've recently reviewed, this needs to be read even if you don't have daughters or teach young women.

Thoughts on the cover:
I'm not sure if this particular book received a revised and updated edition like the other ones I've read, but hopefully it does at some point just to receive cover art that matches the other updated editions.
Posted by Andrea at 10:25 PM