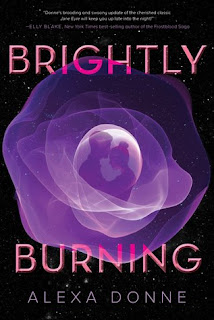 A lush and enthralling reimagining of the classic Jane Eyre, set among the stars.

Stella Ainsley leaves poverty behind when she quits her engineering job aboard the Stalwart to become a governess on a private ship. On the Rochester, there's no water ration, more books than one person could devour in a lifetime, and an AI who seems more friend than robot.

But no one warned Stella that the ship seems to be haunted, nor that it may be involved in a conspiracy that could topple the entire interstellar fleet. Surrounded by mysteries, Stella forges a warm connection with the brooding but kind, nineteen-year-old Captain Hugo. But as they grow closer, his unpredictable behaviour causes suspicions to mount. Without knowing who to trust, Stella must decide whether to follow her head or her heart.

Alexa Donne's breathtaking debut will seduce and beguile you, a story perfect for fans of Marissa Meyer and Amie Kaufman.

Like my obsession with Beauty and the Beast, I will devour any type of Jane Eyre retelling faster than you can blink. So of course I had to read a version that not only incorporates science fiction elements, but does so quite well in my opinion.

Though this version obviously has to deviate from specific details from the original, I think it manages to both capture the spirit of the original while being daring enough to be creatively different.

In the wake of a new ice age on earth, humanity has taken to the skies, living in spaceship communities. In a world where one's lifespan is half of what it once was, most youth are married and well-versed in their apprenticed careers by age eighteen. As she approaches her own eighteenth birthday, Stella longs to escape the poverty and dead-end path she walks along on the Stalwart. Though she lives a companionable existence with friends who were also orphaned in childhood, Stella longs for something more. When she lands a governess position on the Rochester, she is presented with an environment where class lines are blurred and she is seen as an equal for the first time in her life. When secrets and conspiracies threaten her new home, Stella is forced to choose between who she loves, and what she knows is right.

First off, I have to give the author credit for her stellar (yes, I'm going with the space puns) world building skills. Details of Stella's world are revealed as she gives a lesson to the children on the Stalwart, which again fits in nicely given the original story. I was quite impressed with how she managed to incorporate not only the key features of the original story, but also kept the feminist themes and examination of social class in a believable science fiction environment. I also like how the plot was changed so that Stella and Hugo's conflict has a more far-reaching effect than Jane and Edward's did in the original story, there's actually more at stake than just their own happiness. Just as an aside, the scene with Hugo and Stella in the library made my bookworm heart skip a beat, so kudos to the author for writing that scene.

The only thing I would say was a bit of a disappointment was the writing. I was expecting a more sophisticated type of novel, and it ended up being more juvenile in tone than I anticipated. Plus, sometimes you'll get vocabulary from the original novel interspersed with casual modern speech, it's a bit jarring and made me wonder which time period I was actually in. Also, the romance between Stella and Hugo wasn't as believable as Jane and Edward's; I think if the book were longer and they had more time to interact that would've improved a bit.

Recommendation:
It doesn't have the same romantic feel as the original, but the overall spirit and themes of Jane Eyre are well-represented here, as is the science fiction elements.

Thoughts on the cover:
It's not bad, but not overly impressive either.
Posted by Andrea at 10:05 PM