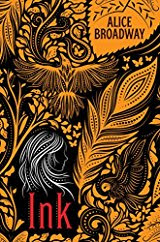 There are no secrets in Saintstone.

From the moment you're born, every achievement, every failing, and every significant moment are all immortalized on your skin. There are honourable marks that let people know you're trustworthy. And shameful tattoos that announce you as a traitor.

After her father dies, Leora finds solace in the fact that his skin tells a wonderful story. That is, until she glimpses a mark on the back of his neck...the symbol of the worst crime a person can commit in Saintstone. Leora knows it has to be a mistake, but before she can do anything about it, the horrifying secret gets out, jeopardizing her father's legacy...and Leora's life.

In her startlingly prescient debut, Alice Broadway shines a light on the dangerous lengths we go to make our world feel orderly - even when the truth refuses to stay within the lines. This rich, lyrical fantasy with echoes of Orwell is unlike anything you've ever read, a tale guaranteed to get under your skin...

Review:
The premise behind this was just so compelling I had to give it a try, and the cover and overall visual presentation is just so stinking pretty.

Leora's world is one where babies are welcomed into the world by tattooing their names on their body. As they grow up, new marks are added as they age and enter professions. But criminals are also marked, and the worst punishment is to be Forgotten, to have the book that's made from your skin after you die be burned rather than kept safely by your family for generations. When Leora's father dies from an illness and she and her mother glimpse his book for the first time, something seems off but she can't quite figure out why. When she sees a person being marked publicly as Forgotten for stealing someone's skin, she realizes that her father bore the same horrible mark: that of a crow. With her mother refusing to talk about it with her, Leora is forced to piece things together on her own.

The world building here is truly well done, it really immerses you in a place where people are immensely afraid of being deceived and can't possibly imagine not being able to tell a person's story by looking at their skin. Leora wants to be seen as more than just a set of tattoos, but struggles with the sheer disgust and fear towards "blanks" that she's been raised in. The author writes quite well too, I never thought I'd ever think a scene about inking a tattoo could be written so eloquently and with such feeling.

My only complaint with the story is that this beautiful world building is done at the sacrifice of pacing. We get a wealth of information about Leora's world, but the main plot of trying to figure out what crime her father committed and what will become of his book goes by at a snail's pace and isn't even revealed until the last fifty pages of the novel. This is the first of at least two books, so the story will continue thankfully, but I can see readers losing patience with the pacing here.

Recommendation:
An incredible dystopian with an original premise and amazing world building that's unfortunately done at the expense of pacing. But still worth the read.

Thoughts on the cover:
So. Freaking. Pretty. The copper metallic effects with the images of the owl and the crow becoming recognizable after a couple seconds is a lovely touch here.
Posted by Andrea at 9:58 PM