Between Shades of Gray - Ruta Sepetys 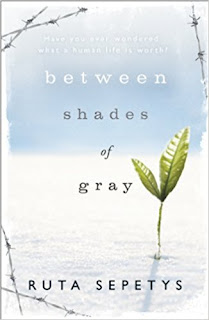 Have you ever wondered what a human life is worth? That morning, my brother's was worth a pocket watch.

In 1941, fifteen-year-old Lina is preparing for art school, first dates, and all that summer has to offer. But one night, the Soviet secret police barge violently into her home, deporting her along with her mother and younger brother. they are being sent to Siberia. Lina's father has been separated from the family and sentenced to death in a prison camp. All is lost.

Lina fights for her life, fearless, vowing that if she survives she will honour her family, and the thousands like hers, by documenting their experiences in her art and writing. She risks everything to use her art as messages, hoping they will make their way to her father's prison camp to let him know they are still alive.

It is a long and harrowing journey, and it is only their incredible strength, love, and hope that pull Lina and her family through each day. But will love be enough to keep them alive?

Between Shades of Gray is a riveting novel that steals your breath, captures your heart, and reveals the miraculous nature of the human spirit.

Review:
This book is on reading lists for several courses at the school I teach at; its the reason I was tempted to pick it up, and after reading it I can see why. Between Shades of Gray is a beautiful story about a time period in history that is decidedly cruel and ugly. This novel also has the difficult job of educating readers about events that most people know nothing about; unlike the Holocaust and other atrocities of the modern age, this was the first I'd heard about a genocide taking place in the Baltic countries.

Lina is a normal teenager with an artistic talent living under Soviet occupation in Kaunas, Lithuania. In June 1941, Soviet police storm her house and she, her mother, and ten-year-old brother Jonas are taken in the night. Unbeknownst to them, their father has already been taken to prison. After a journey in train cars reminiscent of those experienced by victims of the Holocaust, Lina and her family arrive at a farm in the Altai region in Siberia where they are expected to work in conditions similar to those of a concentration camp. After refusing to sign documents admitting they are criminals and agreeing to sentence of 25 years hard labour, their conditions deteriorate even further. Despite the occasional kindness shown to them by both their own, locals, and Soviet guards, the deportees continue to die. Being moved even farther north past the Arctic Circle forces Lina and her family to call upon a degree of strength they're not even sure they possess.

The novel is divided into 85 short chapters that contribute to the immersive atmosphere; the story envelops you from the first lines and before you know it you've read a third of the book. Lina is an engaging narrator, peppering her observations with flashbacks from the past relating to the events happening in front of her. The romance between she and Andrius isn't as well developed as I'd like, but it has the whole "shared trauma" angle to suspend your disbelief regarding it.

The main purpose of this book is shedding light on the historical events that had been kept secret for so long, and it does the job very well. It also manages to tell a very touching tale of the human spirit managing to triumph in the most horrific conditions. I also particularly enjoy Kretzsky as a character and what the author chose to do with him in the novel (won't elaborate for fear of spoilers, but it would make for an interesting discussion in relation to said themes).

Recommendation:
Read it, it's just amazing. Especially before the film version is supposed to release later this year.

Thoughts on the cover:
I like my cover (older release) better than the newer cover art that decidedly screams "YA teenage girl". The older cover actually conveys something about the themes, whereas the new cover just looks pretty with not much substance. 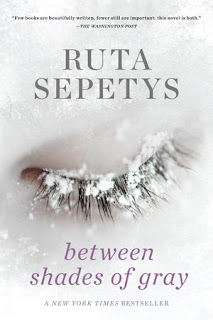