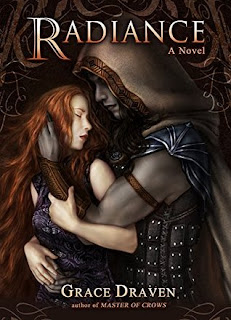 The Prince of No Value

Brishen Khaskem, prince of the Kai, has lived content as the nonessential spare heir to a throne secured many times over. A trade and political alliance between the human kingdom of Gaur and the Kai kingdom of Bast-Haradis requires that he marry a Gauri woman to seal the treaty. Always a dutiful son, Brishen agrees to the marriage and discovers his bride is as ugly as he expected and more beautiful than he could have imagined.

The Noblewoman of No Importance

Ildiko, niece of the Gauri king, has always known her only worth to the royal family lay in a strategic marriage. Resigned to her fate, she is horrified to learn that her intended groom isn't just a foreign aristocrat but the younger prince of a people neither familiar nor human. Bound to her new husband, Ildiko will leave behind all she's known to embrace a man shrouded in darkness but with a soul forged by light.

Two people brought together by the trappings of duty and politics will discover they are destined for each other, even as the powers of a hostile kingdom scheme to tear them apart.

Review:
I needed some light summer reading lately, kind of like a beach read (but not since I don't do beaches), and this is what I ended up picking. I honestly didn't have huge expectations going into it, but I have to say I was honestly surprised that I ended up actually enjoying it.

Brishen and Ildiko are both of royal blood, but aren't very important in the overall scheme of things, and as such are married off to each other for a political alliance. Brishen's people aren't human (but conveniently enough share the same anatomy with only some slight differences), so both partners find the other ugly and repulsive from the get-go, and are honest about it. While Ildiko gets used to her role as the Hercegese, she and Brishen are attacked by a neighbouring kingdom trying to take advantage of the newfound alliance.

The one thing that stands out in this novel is the dialogue. Brishen and Ildiko are brutally honest with each other from their first meeting, and this leads to some really hilarious dialogue between the two which was quite refreshing to read. Their romance is very much a slow burn that takes time to develop, and I was just thankful it wasn't another case of insta-love that I see way too frequently for my liking. There were a few things that bugged me on the other end of the spectrum. Considering Brishen and Ildiko both consider the other to be ugly (and to an extent unsettling), they are overly kind to each other at the beginning. In my experience, people who find others ugly to the point of looking like a corpse aren't exactly going to show a great degree of respect towards that person. Also, it was way too easy for Ildiko to adjust, she just fit right in to Kai society socially, her appearance being the exception. I'll buy that growing up in a courtly environment would prep her for the verbal sparring sessions, but I'd expect her to struggle with at least a couple things (like the Scarpatine, her adjustment to that was a blip on the radar for something that's described as something coming out of Alien).

Recommendation:
Worth the read in my opinion, it'll make you laugh at the very least. There is also a sequel to this that I'll be tracking down as well.

Thoughts on the cover:
The pose fits the mood of the book, but I like how Brishen is posed in such a way as to avoid really illustrating his eyes and teeth (the main descriptors that stood out while reading).
Posted by Andrea at 9:58 PM