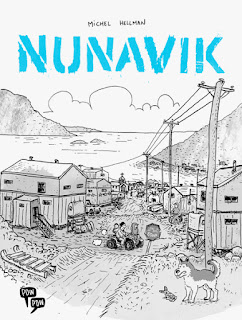 "Do you know what constitutes a typical Inuit family? A man, a woman, two children...and an anthropologist!" Follow Montreal author Michel Hellman on a trip to Nunavik as he discovers he's the punchline to that joke.

Review:
This was an interesting selection that popped up when I was browsing through new library books. Nunavik is the northern part of Quebec, sparsely inhabited by Inuit peoples, where Montreal artist/author Michel Hellman travels to for inspiration for his new graphic novel. The end result reads like a travelogue rather than an actual story, showcasing both the beauty of the North as well as its challenges.

The art style is simple, but conveys much, and it's an interesting detail that the artist decides to portray himself as a bear but truthfully depict everyone else. I liked how the author does explain the issues that Nunavik faces, but there's no real reflection on them, they're just presented with no follow up. This would make for a good discussion prompt for a classroom or a bookclub, though.

Recommendation:
A welcome look into a part of Canada rarely explored.

Thoughts on the cover:
The cover ives you a good idea of the artistic style.
Posted by Andrea at 12:29 PM