Flame in the Mist - Renee Ahdieh 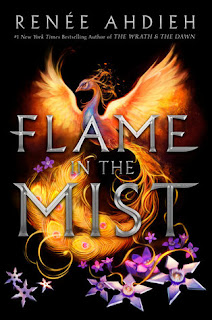 The only daughter of a prominent samurai, Mariko has always known she'd been raised for one purpose and one purpose only: to marry. Never mind her cunning, which rivals that of her twin brother, Kenshin, or her skills as an accomplished alchemist. Since Mariko was not born a boy, her fate was sealed the moment she drew her first breath.

So, at just seventeen years old, Mariko is sent to the imperial palace to meet her betrothed, a man she did not choose, for the very first time. But the journey is cut short when Mariko's convoy is viciously attacked by the Black Clan, a dangerous group of bandits who've been hired to kill Mariko before she reaches the palace.

The lone survivor, Maiko narrowly escapes to the woods, where she plots her revenge. Dressed as a peasant boy, she sets out to infiltrate the Black Clan and hunt down those responsible for the target on her back. Once she's within their ranks, though, Mariko finds for the first time she's appreciated for her intellect and abilities. She even finds herself falling in love - a love that will force her to question everything she's ever known about her family, her purpose, and her deepest desires.

Set against the backdrop of feudal Japan, Flame in the Mist is a passionate, action-packed adventure from #1 New York Times bestselling author Renee Ahdieh.

Review:
Whoo boy, am I having bad luck with books in the past few days...

I have a degree in Japanese Studies, I'm usually all over books set in Japanese settings so long as they don't butcher it completely. Though the author did a good job with the Japanese setting and atmosphere, not even that could save this book.

Mariko is the daughter of a daimyo in feudal Japan, who is betrothed to one of the emperor's sons. She resents this, obviously, because she's smart enough to actually do more than simply be a pawn in a political marriage. When her convoy is attacked with the intent to kill her, she dresses up as a boy and tracks down the Black Clan, said to be responsible for the attack, to infiltrate them to exact her revenge. She soon learns that the Black Clan isn't as bad as she's been led to believe (no, really?), and that her family is actually more diabolical than she ever thought possible (for someone as smart as Mariko's supposed to be, I'm amazed it took her that long to figure it out).

First off, people are comparing this to Mulan....it isn't; it involves Mariko dressing up as a boy, that's about as far as the comparison goes. Mariko is smart, I'll give her that, but she is such a spoiled-little-rich-girl stereotype that it makes me want to smack her. For someone so smart, she doesn't realize her privilege and that the peasants serving under her father might actually be oppressed and unhappy. The romance isn't believable; I have no clue why she ended up with the guy she did. they're not very compatible. Also, the magical elements in this book just pop out of nowhere with no explanation as to what they are or how they work. I honestly thought this was a regular historical fiction novel until Mariko witnesses a magic tree in the Black Clan's encampment that restrains and kills someone, and I had to go back to make sure I'd read it correctly, since there had been no mention of magic at all up to that point (beyond the usual generic cultural references to youkai). Mariko did become a little more tolerable towards the end, but honestly I'd lost interest by that point and was only reading for completion's sake.

Recommendation:
If you liked The Wrath and the Dawn (the author's previous work), you'll probably like this, since the stories are rather similar, but it wasn't my thing at all. This is the first book in a new series apparently, so it will be continuing.

Thoughts on the cover:
So stinking pretty. The black/orange/purple combo is just so aesthetically pleasing. I like the little detail of how the flowers slowly morph into shurikens.
Posted by Andrea at 10:12 PM